What the heck is a Pie Iron?

Pie Irons have many different names.  You may have heard them called Jaffle Irons or Jaffies.  This was the brand name of the original pie iron made by an Australian company.  Other names are Mountain Pies, Pudgie Pies, Hobo Pies, Pie Sham or Toasties.

Okay, so you know what they are called, but what is it?  Pie Irons are a mold made of either aluminum or cast iron, have a long handle usually of steel with handles.  Place in your desired ingredients, close it up, and put it either on your campfire coals or I even used our camp stove when it was raining.  I would recommend you stick with cast iron, as that aluminum can melt if you aren't paying attention.

Pie Irons are most commonly used like a sandwich press.  Butter up some bread and you'll have a great grilled cheese in no time.  Another common pie iron creation is a fruit pie, again, butter your bread, put in a few spoon fulls of your favorite pie filling and voila, instant pies at your campsite.  If your looking for something new, instead of the overly used s'mores, this is a great item!  There are so many recipes that are simple and have a great wow factor.

Parents, be sure to watch kids closely when using these items, not only due to the closeness to the campfire, but the contents get extremely hot!!

Where to Find Your Pie Iron? 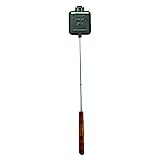 Have you ever used a Pie Iron?

We went camping over the Fourth of July weekend.  Within our camping group, I'm known as the person that brings the most unique and delicious food.  This trip, I wanted to try something new.  Pie Irons were my "weapon" of choice.

I started by doing loads of research online.  I found many websites full of great recipes, and I have them listed for you below.  I had a hard time, but I choose my menu.  We would be arriving after dinner the first night, so I only had to plan 4 meals.  We had breakfast sandwiches with hash browns, Sloppy Joe's, Tacos, Fruit Pies and Cinnamon Rolls.

I made sure to have all of my prep work done and plenty of time savers for our trip.  I bought butter flavored spray, like pam, to use instead of butter, which made cooking a snap with the pie irons.

Breakfast the first morning was breakfast sandwiches and hash browns in the pie irons.  I had premade frozen sausage biscuits and ham croissant sandwiches.  They had defrosted in the cooler overnight.  I gave the pie iron a quick spray, put the sandwiches in, a few minutes and a few turns over the camp stove, and they were ready.  I did pretty much the same thing with the hash browns, gave the iron a spray and put the hash brown patties in for a few minutes.

Lunch was Sloppy Joe's.  These were amazingly good.  You'd never think something so simple would be so delicious when cooked outside.  I precooked and seasoned the sloppy joe meat at home and then froze it.  That way it would defrost in the cooler and keep everything else cold too.  Butter your bread, place some sloppy joe mix inside and maybe even a little shredded cheese. Yummo!

For dinner we made Tacos.  No one could believe I could pull this off over a campfire, but they were a hit!  Again, I precooked, seasoned and froze my taco meat.  Inside the pie iron, I put corn tortillas with butter flavored spray on the outside with taco filling and cheese.  The shell got just crispy enough to taste great, but still pliable enough to put in lettuce, salsa and sour cream right after they came out of the iron.

Instead of S'mores we had cherry pies.  Butter your bread, put in some filling and hold in the fire, just like your marshmallows.  After they are done, we put some canned frosting on them, but powdered sugar would work just as well.

Then next morning, before we stated packing up, we had fresh baked cinnamon rolls.  They were straight of of the tube into a sprayed pie iron.  Amazing!!!

These were such a hit, I will 100% be using them again.  I could only find a single aluminum pie iron at our local sporting goods store.  Before our next trip, I will be picking up a double cast iron pie iron from the links above.  Cooking for a family with a single iron was a bit of a challenge.  Luckily everything was so fabulous, nobody minded the wait.  I didn't have any problems with the aluminum melting, but I would like the cast iron for the durability.

I hope you decide to give this great summer product a try at your next camp out.  It made ours a smashing success!