What To Know Before You Go

I'm sure some people will be surprised that I have categorized Disney Quest as a theme park. But, when you think about what it is, and what Disney advertises it as, it makes perfect sense. Disney Quest is a five story interactive theme park.

What exactly does that mean? The guest is completely immersed in every ride and attraction. Nearly every attraction has a game-like feel to it. If games aren't something your entire party is interested in there is still plenty for them to do.

One thing you need to know about Disney Quest is that it is all indoors. While that may be common sense since its in a giant building at Downtown Disney sometimes all the aspects don't exactly click. Example? Time has no meaning when you are at Disney Quest. I don't mean that time stops or anything crazy like that. All I mean is that since it is inside and has controlled lighting it is really hard to tell how long you have been in that building, especially if you are having fun. Five hours could feel like only two or so.

Another thing to keep in mind, and this one is very important, is that it is very easy to get lost in Disney Quest. All the floors look alike and the lighting doesn't make it any easier. A child looking for a bathroom could easily end up a floor or two away from their family. Even I have a hard time navigating the different floors and I have been visiting for years. 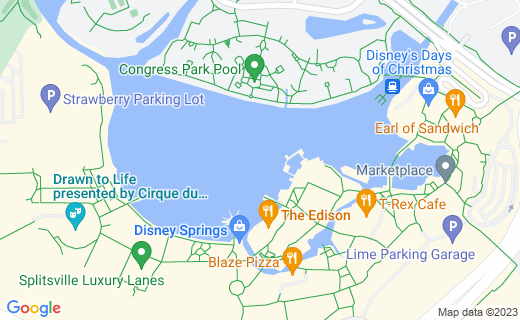 Just like with any theme park there are some attractions that are more popular than others. The Pirates of the Caribbean ride is probably the most popular attraction at Disney Quest. This ride is intense. You get a pair of goggles, to make the screen produce a 3-D image, on your way to your ship. A cast member explains how the ride/game works. Your group will be broken into different players. The captain will steer the ship, and everyone else will have to fire cannons to get treasure. During all of this the ship is rocking around, making it a little difficult to get around. Trust me you look absolutely ridiculous when your playing but it is totally worth it. This attraction can be a little intense for younger riders as it has loud noises, gets pretty dark, and has scary characters.

The jungle cruise ride is another popular attraction. Your group is put into a boat and right before it starts the cushion under the boat is inflated. The story behind the ride is that you are going back in time to the time of the dinosaurs and in order to get back to the present time you need to hunt down the time travel devise. This ride is a work out. You have to paddle to move the boat on the screen, all the while the cushion is moving you around as if you were really in water. Its great fun, but if you ride it more than once don't be surprised if your arms are a little sore.

Buzz Lightyear's Astroblaster is another very popular ride. This ride is great for all ages. You ride in pairs, it is much harder alone trust me. One person drives the car and the other blasts balls at the other cars. If your car gets hit it will spin around for a moment. To collect more 'blasters' you need to drive over them.

If you thought the line for the Pirates of the Caribbean ride were long just wait until you see the lines for cyber space mountain. On busy days you will need to wait to create a coaster and then wait again to ride your creation. Overall it is not uncommon to wait for over 90 minutes for the ride. That's nearly as long as the wait for a real roller coaster!

If fighting pirates or escaping from dinosaurs isn't enough for you or your thrill seekers give cyber space mountain a try. With the assistance of Bill Nye (that's right the Science Guy) you can create your very own roller coaster. You put make it as fast as you want, as high as you want, and add loops until your heart is content.

Once you have created a roller coaster to meet your needs you have the chance to ride it. Well, as long as you are at least 51 inches taller. One of the only downsides to this ride is that the simulator can only fit two riders at one time. You get strapped into a simulator that has full rotation, and as you move as you see the ride progress on the screen. Of course, if at any time your creation gets a little too intense for you there is an emergency stop button for both riders.

After the ride is over you get the chance to watch your coaster in action. Watching the film of your ride is almost as much fun as riding it, especially if you are riding with someone with long hair or that makes interesting facial expressions. If you like the film you can even purchase a copy of it to bring home. The one downside to the video is that there is no sound.

What are you looking forward to most about Disney Quest

The Tame Side of Disney Quest

If riding roller coasters in space isn't your idea of a good time there is still plenty for you to do. There is the animation academy where you can learn to draw classic Disney characters. There is an entire floor dedicated to classic arcade games, all of which are included in your admission price. That means you can play Pac Man for hours on end without using any quarters!

If You Get Hungry

It should come as no surprise that at some point running around playing games and having fun that you will get hungry. Thankfully Disney has two quick service restaurants, one on the fourth floor and the other on the fifth. Cheesecake Factory used to be stationed at these locations but they left when their contract expired a few years ago. The nice thing is that the two quick service restaurants accept dining plans.

Disney Quest is a great place to go on rainy days. That being said that is also when it is most busy since everyone is trying to get out of the rain.

There is an additional fee to enter Disney Quest. You can either buy a ticket at the ticket booth or you can add the water parks and more option onto your tickets.

This is not an attraction you can do in a couple of hours, especially if its your first time. Plan on spending at least three hours, more if you plan on playing the arcade games.

It is entirely possible to spend an entire day trying to do everything that Disney Quest has to offer. Much like the theme parks you need to know your limits and try not to push them too much.

As I said earlier it can be very hard to determine time while you are in Disney Quest, make sure you give yourself plenty of time to enjoy it. You don't want to have to rush to leave because you have dinner reservations on the other side of the property and you lost track of time.

If you want to enjoy Disney Quest you need to do so ASAP! It will be closing at some point in 2016, though the exact date or its replacement have not been officially released.