Book a Fishing Tour as Part of Your Vacation

I have lived in Costa Rica for the past five years and I am always amazed at the variety of things there are to do here. Take fishing for instance, no matter what time of the year, there are always places to go to catch fish! There are some saltwater species that are caught year round, like sailfish, snapper (pargo ), mahi mahi (dorado ) and roosterfish. There are peak seasons that vary with each of the species and the seasons vary according to whether one is in the north, middle or southern Pacific region of the country. A table that lists the various peak season times for blue and black marlin fishing is listed below.

The peak tourist season for fishing vacations in Costa Rica coincides with the winter months that are experienced in temperate climates like the United States and European countries. It is a good time to escape to a warmer climate that is almost always in the mid to upper 80's Fahrenheit. This time also coincides with peak marlin catch periods in the mid to lower part of Puntarenas province on the Pacific.

Sailfish can usually be caught any time of the year on the Pacific side, but there are peaks from May to October in Guanacaste locations in the northern part. In the middle and southern part of the Pacific coast, sailfish catches peak during the December to March period.

Tourists come to Costa Rica to catch freshwater species as well. The species which can be caught in Lake Arenal and the Tortuguero area include rainbow bass (blue guapote ), machaca , tepe , machin , mojarra , blue tilapia and more. For photos of freshwater species of fish in Costa Rica, click on the link. The Caribbean side of the country is known for its snook and tarpon fishery. A species of tarpon is also found in the lagoons of Reserva Cañas Negro, in the in the north central area bordering Nicaragua. You can also fish for tarpon near the mouths of the rivers where they meet the Caribbean, where the individual catches usually weigh more than those from the lagoons. However, seasonal rains in the Límon province that sometimes make getting out in the water difficult, particularly during May through September.

Below I discuss some of the tours that offer these varying experiences to tourists. These tours include flyfishing, billfishing, and freshwater fishing. Another type of tour that is discussed is fishing from kayaks, an experience that can give you an opportunity to catch a roosterfish and other inshore species. A map is included at the bottom of this article that has all of the locations discussed.

Catching Roosterfish from a Kayak

On the Osa Peninsula, where there is

Corcovado National Park, there is a place where you can do half-day, full day and multiple day tours in sea kayaks. The video above shows someone catching a roosterfish from a sea kayak that is outfitted for fishing. The tour guide of this operation, Costa Rica Kayak Fishing, is Joe Lynberg and he is located in the town of Puerto Jimenez on the southeast tip of the peninsula. Half a day of inshore fishing is $100, including the tackle, water, snacks, fruit and him as your personal guide.

Billfish and Inshore Fishing Tours on the Pacific

As mentioned in the first photo at the top of this article, renting a boat for a single day for billfishing starts at about $500, and it can go as high as $3200, depending on the type of boat that you want to rent. Packaged fishing tours help lower the cost to each individual. Tour packages usually include shuttle services from the two international airports, Liberia and San José, lodging, fishing for 2 days for a 5 day trip and meals. The cost of such a package is around $1800 per person, and it doesn't include your airfare to Costa Rica.

Inshore fishing for species like tuna, snapper, dorado and roosterfish is a half day trip, and I have seen prices that go as low as $450 for center-console boats, which don't have a cabin or any other amenities.

If you want to do some flyfishing while you are in Costa Rica, contact Peter Gorinski of Fly Fish in Costa Rica. He can show you where to go to catch tarpon in the Cañas Negro Reserve and Río Frio. You can also arrange trips to go in search of rainbow trout on the Río Savegre south of San José or there is relaxing drift fishing for machaca on the Río Niño near Upala. Lake Arenal can also be fished for the bass-like guapote which has a reputation as a very strong fighter. Peter can provide your fishing gear and he packs a lunch for you. To find out more about flyfishing read the article about Gorinski's tours in Costa Rica Outdoors.

If you wish to fish Lake Arenal while you are visiting around Arenal Volcano, you can check out Captain Ron's Lake Arenal Fishing Tours. Ron Saunders outfits you with the gear, food and complimentary cigars and takes you out on his 18-ft. boat that has plenty of horsepower to get around the lake. You can use conventional bait casting gear or flyfishing gear. You can do half-day and full day trips. As mentioned below, other guide services can also be found to fish this long, narrow reservoir which provides irrigation water and hydroelectricity.

You can also arrange trips to catch tarpon using conventional tackle to Rìo Frio which feeds the lagoons of Cañas Negro. December to May is the best time to go there and catch average size fish weighting from 30 to 40 lbs. Arenal Sportfishing Tours is one of the choices take you there, or to Lake Arenal to fish for guapote. 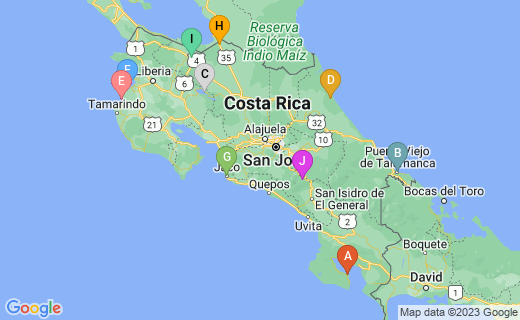 Rooster tail and other inshore fishing with sea kayaks. costaricakayakfishing.net

Billfish, inshore fishing for all other species

Silvestres Caño Negro, where you can catch tarpon via conventional and flyfishing tackle.

A place to go on a drift fishing trip on the Río Niño to catch machaca.