Hockey Trivia: The Original Niagara Falls Flyers of the OHA

Q. Like most OHA clubs in the 1960’s, the Niagara Falls Flyers were sponsored by a National Hockey League club. Which NHL club sponsored the Flyers?

A. From 1960 until 1967, the Boston Bruins sponsored the Niagara Falls Flyers. The team’s jerseys reflected this affiliation with the black, yellow and white colours. Future NHL stars that got their start with the Flyers include Bernie Parent, Derek Sanderson, Ed Westfall and Jim Schoenfeld. Bernie Parent, best known for his goaltending with the Philadelphia Flyers during the 1970’s, is the only alumnus of the Niagara Falls Flyers to be inducted into the Hockey Hall of Fame.

Q. This version of the Niagara Falls Flyers went to the Memorial Cup three times during the 1960’s and faced the same team on the first two occasions, winning once and losing once. Which team from the west did they face in those first two Memorial Cups?

A. The Edmonton Oil Kings were the opponent of Niagara Falls in the 1963 and 1965 Memorial Cups. Edmonton won four games to two in 1963 and the Flyers won four games to one in 1965. The Oil Kings have a similar sort of history as the Flyers. The original franchise that existed from 1951-52 to 1975-76 moved to Portland, Oregon where they remain today as the Portland Winterhawks. The Flin Flon Bombers became a second carnation of the Oil Kings for just one season, 1978-79. In 2007-08, a third version of the Oil Kings entered the WHL as an expansion franchise.

Q. In 1972, the Flyers moved to become what current Ontario Hockey League team?

A. The Flyers left Niagara Falls for Sudbury, Ontario where they were, and still are, known as the Wolves. To date, the franchise’s greatest season in Sudbury came shortly after their arrival in Northern Ontario. In 1975-76, the team was awarded the Hamilton Spectator Trophy as the team with the best regular season record. Sudbury totalled 102 points that season with the help of future NHLers Rod Schutt and Ron Duguay. The Wolves reached the Robertson Cup finals before bowing out to the Hamilton Fincups.

Q. For fifteen years before moving to Niagara Falls in 1960, what Ontario city did the Flyers call home?

A. Previous to landing in Niagara Falls, the franchise was located in Barrie, Ontario, where they also carried the Flyers nickname. The club was in Barrie from the 1945-46 season. From 1945 to 1960, the Barrie Flyers graced the OHA. The Flyers were OHA champs four times and won the Memorial Cup in 1951 and 1953. Thirty-five years later, Barrie would get back an OHL franchise in the form of the Colts. The Colts have since been to the Robertson cup finals four times, winning in 1999-00 over the Plymouth Whalers.

The Flyers and the Niagara Falls Thunder: Major Junior Hockey in the Roaring City
Buy Now 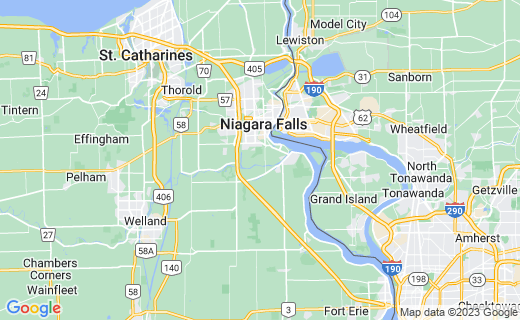 If Buffalo, NY gets an OHL franchise, what should it be called?