How to choose a marine inverter for your boat

Let There Be Light!

A simple, layman's guide to choosing the right marine inverter for your boat. Inverters are the piece of equipment that takes the DC power from your batteries and turns it into AC power so that you can plug in and use things like laptops, TV's, power tools, etc. In case you didn't know, you can't just hook a household power outlet up to a battery and then run your microwave from that outlet.You need an inverter. Fortunately they are very easy to hook up and use so you can enjoy the comforts of home on board your boat.

In North America people say both 110 and 120 volts when referring to electrical appliances. It's pretty much the same thing so don't worry about the differences.

Like I said at the start, this is going to be a simple guide so I'm not going to get into a lot of technical talk. Instead I'll just tell you what all the techno-jargon means in terms of what it can do for you. So let's talk about the differences between full sine wave (also known as pure sine wave) versus modified sine wave inverters.

Pure Sine Wave Inverters
Everyone will tell you that you need pure sine wave inverters if you're going to run things like computers, time pieces or microwave ovens. At least, that's the rule of thumb. From my personal experience, I have not had any difficulty running my laptop from a modified sine wave inverter for several years. I was even able to run a a microwave from it but it didn't seem to have the same 'oompf!' that it did when connected to shore power. As for time pieces i.e. digital clocks, etc. the nature of the modified sine wave makes the clock keep inaccurate time. I personally don't know of any boaters who use a digital clock on their boat so this seems to be a fairly low priority consideration when choosing the type of inverter you are going to buy.

A Personal Note. It is widely believed that using a modified sine wave inverter to power your laptop or other, delicate electronic, equipment, will eventually damage or shorten the life of those devices. I'm not an electrician nor an electrical engineer so I have no idea if that is true or not. All I can say is that I have not had any issues running my own laptops from a modified sine wave inverter. I also think that any electronic device on a boat, in the salty, sea air, will have a shortened life expectancy so this wasn't a factor in deciding what inverter to choose.

Xantrex Technology Inc, 806-1210 Inverter Prowatt Sw 1000
Just like the one shown in the video, this inverter has a digital readout to make it easy for you to keep track of what is going on with your available electrical power. Just take a look at the customer reviews and you will see that this model inverter gets high ranks and is recommended by people just like us.
Buy Now

Magnum Energy MS4448PAE MS-PAE Series 4400W 48VDC Pure Sine Inverter Charger; Provides multiple ports, including an RS485 communication port for network expansion, and a remote port
Recommended by West Marine as you can see in the video above. This is another good product that gets great reviews from boaters that use it. Take a moment to look at some of the customer reviews and you will know that you are making a smart decision to get one of these units for your boat. This little treasure not only acts as a powerful inverter to supply you with all the energy that you will need but it also offers the added benefit of charging your boat's batteries as well.
Buy Now

How much power do you need?

How to calculate your power needs

Before you can choose an inverter you need to know how much power you are going to use. And then double it, because you will probably use twice as much electricity as you think you will. Here's how you calculate your power usage:

First, you need to calculate how many electronic devices you will be running AT THE SAME TIME. This is really important for so many reasons that I won't bore you with here. If you have no idea how many electrical devices you will need to power simultaneously, or if you just want to be safe and build in a margin of error, assume you are going to be using every device you have all at once.

The math is simpler than you think. Just look on the side or bottom of the electrical device e.g. TV, laptop, etc. and you should find a sticker that tells you exactly how much power, in watts, each device uses. Tip: sometimes this label is hidden inside the battery compartment of the laptop.

Converting Amps to Watts
If the label only shows how many amps the device uses then you can figure out how many watts that is by multiplying the amps by the voltage (120 for U.S. electronics). e.g. a 120 volt appliance that draws 2 amps means that your inverter will need to deliver 240 watts. for however long you run that appliance.

Make it easy on yourself and assume, for the sake of this math exercise, that you will run any item you turn on for at least one hour. This will make the calculations simpler to work out. Once you know the total number of watts that you will need to power your appliances, you can move on to selecting the right inverter.

Knowing how much power i.e. watts per hour, you are going to need to use your electronic devices, it's a fairly simple matter to choose the right inverter. As I said before, it's a wise precaution to AT LEAST double the number you worked out. If your math tells you that you will use 320 watts an hour, then assume you will use 640 watts.

Are Your Batteries Big Enough?

Batteries are the heart of your boat's electrical system and it's extremely important that you understand them. I sold automotive and marine batteries for nearly 20 years of my life so I could go on for many hours about the technology, the math, and all kinds of things that you won't care about. So, instead, I'll just give you some simple advice on how to ensure you have the right size battery for your electrical needs.

Batteries are rated in amp hours and you can find this rating on the top label. If your battery doesn't have enough amp hours for your needs then you will, obviously, find yourself without electricity. Again, it is also a VERY good idea to get a battery AT LEAST twice as large as what you calculate you will need, remembering the rule below.

An Overview Of Inverters By West Marine

This video from West Marine gives a good overview of how to select the right inverter for your boating needs. It's brief, at only six (6) minutes long, but it covers the difference between pocket inverters and installed inverters. They give a nice explanation about when to use an inverter and when to use a generator or genset. The guys cover inverter chargers and what great benefits they offer. They give a short explanation of what a pure sine wave inverter is and what a modified or quasi sine wave inverter is and which is better for you. At the end they close out the video by advising some rules of thumb about how to match your battery banks to your inverter capacity. overall a nice video that I am sure you will get some value out of. 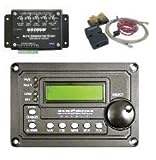 Magnum Energy MEARC50MEBMKMEAGSN Digital LCD Combo; Includes: ME-ARC50 Advanced Remote Digital LCD Display Remote Panel; ME-BMK Battery Monitoring Kit and ME-AGS-N Automatic Generator Start Module with Voltage and Temp Start/Network Version
As mentioned in this West Marine tutorial this remote inverter panel offers you a remote way to turn your inverter both on and off as well as giving you some battery monitoring functions as well. It gives you full control not only over the inverter but over the charger as well, so you can set it up to properly charge gel, flooded and AGM batteries. The guys also touch on the option of having built in transfer switches, which you might find an ideal solution for your boats needs.
Buy Now

Did this help you better understand inverters?