Hunting Is A Sport, A Hobby And A Passion For Many People But It Is Also An Economic Activity Which Generates Revenues Directly And Indirectly

Living in Central France, one of the most rural areas in the country, you cannot escape hunting. France is a hunter’s paradise for its variety of game and beauty of its land. Hunting is part of French culture. In the countryside, almost everyone I know goes hunting and even those who do not like hunting go just for the pleasure of spending time with their friends walking on the fields, laughing, eating and drinking.

However, as common as it is, hunting is not done without permissions and regulations. You cannot hunt in France without a valid permit, and to obtain a permis de chasse you need to take a theory and a practical exam. To pass the exams you must follow training at the Federation Nationale des Chasseurs. The practical training includes knowledge about safety zones, shooting, identifying protected and non-protected species, gun handling, etc. The theory training involves safety, ballistics, law, identifying game, etc.

Like with everything else in France, hunting legally involves a lot of paperwork. To obtain a valid permit to hunt, on top of doing the official training, you must have a copy of insurance for civil responsibility (at least this is free from your insurance company); certificate of good health (you can obtain this from your GP, it will cost you the price of a consultation, 23 euros), two photos and proof of identity. Of course, you must also pay a fee. Later on, once you have your permit, you also need to buy a local licence to hunt on that locality.

"It contains comprehensive advice and information about all aspects of living in the country including buying a home and land; buying and keeping livestock; growing fruit and vegetables; equipment and plant; selling produce; hunting, fishing and other rural pursuits; a comprehensive glossary; and more."

A few days ago I had my first hunting experience. I was informed that the hunting day was starting with breakfast at 7am. As usual I thought this meant croissants, baguettes and coffee so I was astonished when I arrived and realized that this time breakfast meant wine, cold meats, cheeses, coffee and eau de vie. A shock to my system at such early hours. In fact, I was the only one sitting at the top of the table just sipping a coffee and eating a mandarin, while the men and the only other girl present, were indulging like savages in big chunks of cold meats and wine served in cups! The only thing I dared to try was the eau de vie which I had after my coffee on a sugar cube.

The others must have realized my surprise because they told me jokingly that lunch was even bigger. They had planned a wild boar stew with potato soufflé, again more cheeses and wine and some hearty desserts; all of these after the regulatory aperitif of course. One of my biggest surprises was to see everyone coming to the table with their own knife and seeing them eating like in times gone by. Drinking was no less of a shock when I saw that they were using the same glass or shall I say mug, for all the different wines, coffee and eau de vie! In a way it felt like sitting at a medieval table where meats were handled in big chunks and the only piece of cutlery was hunter’s pocket knives.

By the time we finished breakfast, prepared the dogs and loaded the guns it was already 9am. A group had already gone before breakfast to leave cages with food to attract the game. Now it was the right time to go and see what the cages had attracted.

Preparing For The Hunt

After a good profitable morning in the fields, at midday we stopped for a hearty lunch. They hadn’t joked about the wild boar stew, potatoes, pheasant, local cheeses and wine. There was more food on the table than what we could eat in two days but amazingly enough, most of it disappeared and even left room for some freshly baked apple tarts!

On The Way To Hunt

After a short “siesta” (ok, I was the only one napping on a sofa after such an exhausting morning) we headed out to the fields again. Our late afternoon hunt was interrupted by a squeaky noise and a shadow crossing the skies, it was a big crowd of crane flying low, emigrating towards milder climates for the winter. At the rate they were going, they were expected to spend the night at the Natural park of Brenne. Thankfully, they are classed as protected species, so they made it up north safely.

The afternoon, along with the other girl, we just followed the hunters for the pleasure of the walk. We picked up mushrooms, nuts and apples on the way. Like always, me being so prone to accidents, I managed to get stuck in the only square meter of deep mud in the 90 hectares where we were hunting!

Still, even with mud up to my knees, I enjoyed the day. It was much better than what I had imagined. Originally against all hunting sports, I came to be more tolerant about proper hunting. Maybe because it was a fair game where the hunted had a chance to escape; maybe because the hunters were so accurate that their prey didn’t suffer unnecessarily or maybe because the hunting was done for feeding and I had really enjoyed the game we had eaten at lunch time, at least enough to go and search for more for the weeks coming.

During the following days, we have been invited to try the culinary delicacies cooked with the hunted partridge, ducks and pheasants. I am sure I’ll be surprised with the menus!

After yet another hearty dinner – I must have put at least two kilos on that day- we finished the evening with a firework display shown in one of the nearest castles. It was the perfect end under a full moon for a glorious day in Autumn. 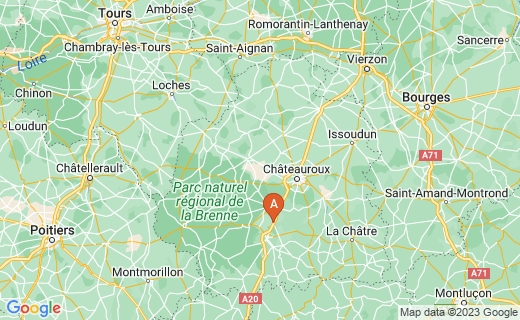 The Chasse accompagnée or accompanied hunting authorisation allows the use of one gun for two hunters. To obtain an accompanied hunting authorisation you must be at least 15 years of age and have a “Godfather” or mentor with a valid hunting permit for at least 5 years and valid for the current year. It is an authorisation given free of charge for those who want to discover hunting before they engage in a course to pass their own permit exam. You can request this permit from the Office National de la Chasse et de la Faune Sauvage

If You Think Hunting Is Cruel...

The Wildlife Habitats Foundation or Fondation pour la Protection des Habitats de la Faune Sauvage, is mainly financed by hunters and it aims to buy and administer natural areas in danger of extinction. In this way, the hunters protect not only the natural spaces but also the habitants of those spaces. To achieve this, the hunters buy the land and work to restore the natural balance in the area. Nowadays, the foundation owns around 4.000 hectares spread over 43 departements.

Obtain a Permission to Hunt

See here if your French is good enough to sit the exam to obtain a permission to hunt:

For more information about the rules and regulations, you can check the main rules that are to be observed while hunting in France at the Syndicat National des Chasseurs de France.