Lost and Found on Mt. Washington, NH: An Idiots Guide to Mountain Climbing

Idiot's Rule #1 - Let someone else make the preparations.

I was a fairly active woman in my mid 30's dating a guy who was an athlete. He hiked for the cardio workout, I hiked for the scenery. We hiked small mountains together near Sacandaga Lake in upstate New York and a few more challenging mountains in the Lake Placid, NY area. We each had a dog. He took his dog on every hike, but my dog was not what I would call agile even though she was an Old English Sheepdog and had running and hiking in her blood. She would go into a coma-like sleep for days after any hiking experience.

All of our hikes were day hikes. We would head up the trail before noon and be back down by 4 or 5. Our provisions consisted of bottled water or juice and pretty sad looking muffins that were flat and smashed by the time we ate them.

My hiking companion told me he climbed Mt. Washington every Columbus Day Weekend and encouraged me to join him the following October. I am a woman who plans for everything. For a venture like this one I would have done safety research and had packing lists, provisions lists, etc. But, I trusted that since this guy had climbed Mt. Washington so often he knew what he was doing and relied on him to be prepared to keep us both safe. I agreed to join him and was excited about the hike.

On the day of our hike, the weather could not have been better. Blue skies overhead, a warm sun beaming down, a light cool breeze in the air. Mt. Washington loomed over the countryside and despite the beauty of the fall colors, it was quite daunting at first. Eventually I got caught up in the hustle and bustle of all the other hikers milling around at Pinkham Notch, our starting point. It was all very congenial. My companion brought his dog with him. He told me the dog had made the hike up and down Mt. Washington many times before.

From Pinkham Notch we walked the relatively easy, approximately 2 1/2 mile path to Tuckermen's Ravine. The trail is wide and pretty smooth. When we reached Tuckermen's Ravine however, I stopped in my tracks. The headwall that starts at the ravine is steep and it's more like a rock climbing exercise. Nevertheless, I watched people of all shapes and sizes climbing upward and was encouraged to continue.

Unlike a walk on a wooded mountain trail, climbing the rocky ravine leaves one pretty exposed. Once I turned my head to look behind me and could see nothing but the ground far below and miles and miles in the distance. I have a healthy respect for heights and after looking at that view my inner child began to sweat. We reached the summit without incident and walked around in the sunshine for awhile enjoying the views.

After stressing about it, I decided i did not want to take the same route back down the mountain. Climbing down the rocky pathway looking out into the distance and down at the rocks below scared me. My hiking companion assured me there were other trails that would take us off the mountain and we began looking for trail markers.

Within five or ten minutes we found a marker that pointed to a more wooded trail. It was steep and as opposed to the Tuckerman's Ravine trail, hardly populated at all. Shortly after we started down the trail I could tell because of the way the narrow path was winding that it was going be a longer hike down than it was coming up. When I asked my companion if that was true he just shook his head, shrugged his shoulders and told me he had no idea, he had never been on this trail before.

I had picked up a map of the trails at the base camp and gave it to my companion to carry in his backpack. Thinking this would be a good time to consult that map, I asked him to let me see it. Looking at me sheepishly he told me he didn't take it with us since he knew the Tuckerman trail so well. OK then, I thought, and asked him if he had a compass. No, he replied again, never needed one.

The path led out of the woods and into a still, sunny clearing. The trail was easier to follow and the fact that it was still winding downhill I found encouraging. We walked for maybe a half mile when we came to a cliff. The trail literally stopped there. Along the side of the cliff was a tree with its trunk in the ground 15 feet below and its highest branches at the top of the cliff where we were standing. All of the branches of the tree had been cut into a makeshift ladder. Obviously, one could just climb down and continue the hike IF THEY DIDN'T HAVE A DOG WITH THEM.

As we stood there trying to come up with a plan, four hikers walked into the clearing behind us. They were familiar with the trail and recognized our problem immediately. In the meantime, "our problem" was sniffing around in circles wondering what the hold up was. We all climbed down the "ladder" and stopped at different levels. The dog was handed from one person to the next until we were all safely on the ground. The dog weighed at least 50 or 60 lbs. so it wasn't an easy accomplishment but a problem that had to be solved quickly because the sun was beginning to set.

Idiot's Rule #7 - Do not bring a flashlight

I felt safer once we connected with hikers who knew the trail. Eventually the trail turned into the woods where it was very dark. Some of our new friends took out their flashlights and others turned on their headband flashlights. When I asked my companion if there was a flashlight in his backpack he said no. Now I was really beginning to wonder what the hell was in that backpack.

Graciously our new friends took us under their wings and walked behind us, their flashlights lighting our way. It took another hour before we were near the main trail that led to the base of the mountain, double the time it would have taken them without us tagging along. During that hour we trekked through a pretty damp area and had to walk across logs that were balanced over small swamps. By the time we reached the main trail we were freezing, wet, tired and very relieved to be safe.

You may be wondering by now the same thing I always wonder when I think of this experience: what would have happened to us if those hikers had not shown up?

If someone had shown me this list before my experience on Mt. Washington I would have thought they were being a bit paranoid, overly careful. Not so anymore. I have learned how important it is to be prepared and hope you have learned to expect the unexpected when you're on the hiking trails. 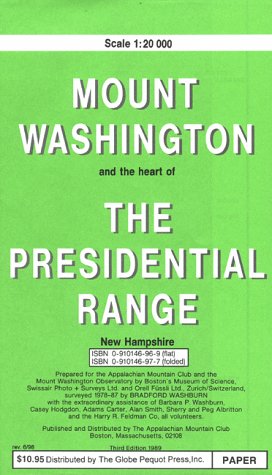 Bradford Washburn's Map of Mt. Washington and the Heart of the Presidential Range
Buy Now