Luna Park at Coney Island - A Tribute to Light

There is an aura of fascination around Luna Park. At the beginning of the 20th Century it was simply so ELECTRIC! Over 100,000 tiny electric lights illuminated the park each summer night after 1903, looking like a million grounded stars against the black skies. By 1907, the park wore a cloak of 1.3 million white lights at night. The effect was the increase the white light of the moon (Luna) on the park grounds by night - romantic and mysterious.

When I began to use the Internet in 1998, Luna Park was one of my first discoveries and I have sought out more information on it ever since that glorious year of no longer having to spend long nights in the university bookstacks or longer weeks waiting for inter-library loans to appear as ordered. This reminds me that I discovered a basket of flashlights for use by library patrons at a local suburban library recently, most likely for older patrons that need more intensified light to find book titles in stall stacks under skylights on overcast days. Thus, electric light is obviously useful as well as entertaining; but Luna Park alit by night is fascinating. More movies should have been filmed there.

An Open Air Circus Without a Tent at Luna Park

It was Luna Park that led me to discover information regarding the history of a small amusement park in my city that disappeared in the 1950s. Passengers could take the train up from Cincinnati to Columbus and board a streetcar at the entrance of Union Station, to be dropped off at the gateway to Olentangy Park.

The park was well attended in its heyday and even sported a roller coaster over a man-made lake. Its theme was "weekend fun", especially during World War II, when people needed a lift and afterward, in the early 1950s amid intense business growth and Cold War intrigue. The front of the park gave way to a large bowling alley, physicians' offices and a restaurant in the 1950s. Today, the lake is on the property of a condominium complex next to a sporting good store, a pet supply outlet, an ice cream shop and a mega-supermarket.

Gallery: Luna By Day and Night

A Usual Sideshow at Luna 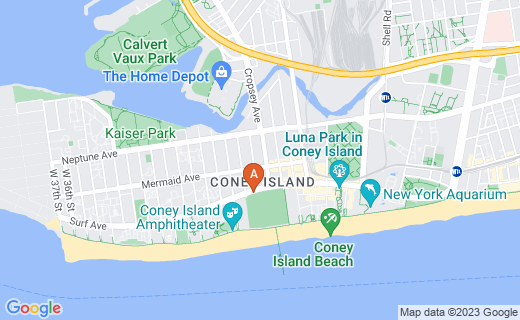 The old Luna was unique, created by Elmer Dundy and Frederic Thompson.

Dundy sold the bankrupted Union Pacific Railroad, while Thompson was an alcoholic architect. It was quite a pairing. They created "A Trip to the Moon" for the 1901 Pan-American Int'l Exposition and it evolved into Luna Park by 1903.

On May 28, 2010, a new Luna Park (lunaparknyc.com) opened under a partnership of the City of New York with Central Amusement International and new offerings are added each spring.

The Three Stooges: An Illustrated History, From Amalgamated Morons to American Icons
Book from which the 2000 TV film "The Three Stooges" was filmed. Includes the background information on Ted Healy, the Stooges' early vaudeville work, Coney Island, and other relevant biographical information.
Buy Now

Thompson and Dundy's Luna Park opened on May 16, 1903. The park covered 22 acres and became the third Coney Island Park, alongside Steeplechase Park, and Dreamland (built closer to the ocean, across the street from Luna). Luna park sat on the grounds of the old Captain Boynton's (or Boyton) Sea Lion Park,

While an overnight success, Luna Park failed 9 years after its Grand Opening, Founder Frederick Thompson went bankrupt in 1912 and lost it to his creditors. However, he stayed on as manager for a number of years.

Luna Park first opened to Coney Island NYC visitors in 1903. However, the second of two fires made it diffcult to continue business.

A fire broke out in the venues of the Pneumatic Tube and the Miniature Subway in mid-December of 1911. Luckily, winds and good water pressure in the fire-fighting equipment available avoided a total loss.

Old newsreels and clippings at the Library of Congress indicate that the fire damage was limited to the Pneumatic Tube, the Checker Slide, and the Temple of Mystery to the east of the main thoroughfare.

Thirty-three years later, multiple fires struck Luna Park in 1944, closing the park for a year, after which a business group purchased it in 1945 and demolished the entire site. The American people lost a beloved theme park.

Interest in reopening Luna began to gain momentum in the 2000s and the park was redesigned, rebuilt, and reopened by Memorial Day Weekend of 2010. Hurricane Sandy produced flood waters and fouled electrical wiring, but hard work by staff and repair people ensured an opening on time in March 2013. Luna Park is back.