PART 1: Aikido-The art of using one's own momentum against himself

Why is Aikido seen as the the ultimate grappling self defence martial art?

Well to be concise, Aikido is a martial art solely based on self defence.Therefore meaning it has no attacks that can be used in a real situation.The only attacks Aikido contains, is for training purposes to study the defensive techniques.These attacks can be catergorized in 3 section: Front attacks,Rear attacks and strikes.They are the following:

Mune-tori - grab lapels with one hand

Ushiro tekubi tori - both wrist to be held

With each one of these attacks a multiple amount of defensive techniques is taught.Taking in regard the amount of possible attacks, one can see how complete Aikido is as a defensive martial art, making sure every possible attack one can launch on you, has an effective defensive manuevre.This is also the reason why Aikido is regarded as such an effective art for self defence.It is probably one of the only arts with such a comprehensive syllibus.

The number of defence tecniques in Aikido is unlimited since the same technique can be used in almost any attack.There are million variations to make each tecnique applicable in a certain scenario.The do however have the core basis of tecniques from where all these variants originate.They can be categorized in throws and locks.

Ikkyo:Refers to the control exercised using only one hand on the elbow and the other one on near the wrist that leverages "uke" to the ground. This technique uses a grip that can apply pressure into the ulnar nerve on the medial side of the person's arm.

Nikkyo:Involves the use of an adductive wristlock that loops the arm while applying painful nerve pressure.

Sankyo:Is known as a "pronating" technique that directs upward-spiraling pressure throughout the person's arm, elbow, and shoulder.

Yonkyo:Is also popular as the "fourth technique." Just like iikkyo, yonko is also a shoulder control but with requires the use of both hands in gripping the forearm. The practitioner's knucklesusually from the palm sideare applied to the opponent's radial nerve against the forearm bone.

It is a noteworthy point to make that these tecniques can be applied in this precise sequence to keep an attacker nuatralized.It is seen as a circle in which the attacker cannot escape.The techniques flows into one another...Ikkyo into Nikkyo,Nikkyo into Sankyo,Sankyo into Yonkyo and Yonkyo into Ikkyo again.Nikkyo and Yonkyo can be devestatingly painful if applied correctly.

Gokyo:This refers to a variant of ikkyo where the hand that grips the wrist is inverted.Gokyo is popular in weapon defence.

Iriminage(entering-body throw):For aikido practitioners, this is a throw where "nage" moves through the space occupied by "uke." This is considered as a classic form that resembles the "clothesline" technique.

Kokyunage(breath throw):This term is coined for various types of flowing "timing throws" in duration of any aikido session.

Kotegaeshi(wrist return):This aikido technique is a characterized by a supinating wristlock-throw, which stretches the person's extensor digitorum.

Shihonage(four-direction throw):Here, the practitioner's hand is folded back past the shoulder and locks the shoulder joint.

Tenchinage(heaven and earth throw):This technique involves the "uke" grabbing both wrists of the "nage." Moving forward, the nage sweeps one hand low (earth) and the other high (heaven), so he or she can unbalance the uke.

These are the foundation techniques.This is however not the main reason Aikido is such an effective art for self defence.The reason why this art is so effective (and why it takes so long to master) is that Aikido teaches the student how to evade an oncoming attack through body movements.It teaches the student to stay calm and sense an attacker's next move.Therefore enabling him to act quickly enough to evade or apply an appropriate technique.That is the essence of Aikido.The quick reaction of the aikidoka enables him to feel the momentum of the attacker and (almost like a parasite) manupilate the momentum to throw the opponent.This is why small people can throw big people twice their size, since powers don't clash,but is rather redirected to suit the aikidoka.After reaching 1st dan in Aikido,it is also said that one starts to form his own style of Aikido that suits his own body and form.The styles of Aikido is thus neverending

Keep in mind that,as I said in my main article,one has to find a good dojo in order to become effective in Aikido.A bad dojo = a useless art that won't be effective in real life.Another point I would like to make is that it often looks,when watching an Aikido class,as if the uke throws himself.The perception is then created that it's all fake.This is false.The reason why aikidoka's do this,is to protect themselves from the effects of the tecnique.If they did not do...they would seriously injure themselves or brake their limbs.This is what would happen if it's applied in real life.

There are 3 main schools of Aikido:

Aikikai: The main streamline form of Aikido that focuses on tecnique as well as the philosophy behind the technique.

Yoshinkan: The hardest form of Aikido that focuses mostly on the tecniques and how to apply it the most efficient way.The Tokyo Riot Police is trained in this style.If the spiritual aspect of Aikido does not interest you,this is definitely the style I would recommend

Ki Society: The softest style of Aikido that focuses on more the philoshopical and spiritual aspect of Aikido than the application of techinques.This style sort of reminds me of Tai Chi.

Part 2,3,4 will deal with Brazilian Jiu Jitsu,Mauy Thai and my conclusion 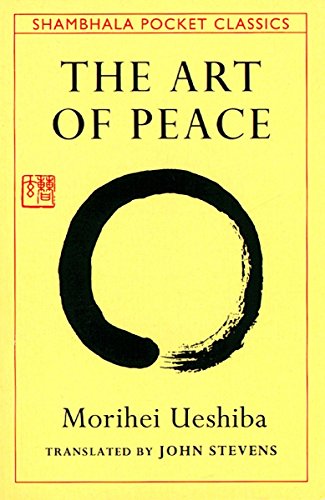 The Art of Peace: Teachings of the Founder of Aikido
Buy Now