Phillies baseball at its best!

Baseball, America's favorite pasttime, is always thrilling! The incredible Phillies are one of the teams which make it so exciting! Philadelphia baseball began way back in the year of 1883 with the National League! This team originally known as the Philadelphia Quakers sure has come far in over a century! They have won 7 National League Pennants and 2 World Series Titles during their history. Members who have won the MVP award during their career on the Phillies are: Mike Schmidt, Chuck Klein, Jim Konstanty, Ryan Howard, and Jimmy Rollins. Other awesome players, Jack Sanford, Dick Allen, Scott Rolen, and Ryan Howard have won Rookie of the Year honors.

Two fantastic teams made a great series full of excitement!

October 21, 2009, at Citizen's Band Park, a baseball game was going on between the Philadelphia Phillies and the Los Angeles Dodgers. These teams were not playng a regular game of hit and catch, but they were playing in the National League Championship Series (NLCS). The Phillies won ten to four! They have won 16 out of 20 games, a National League record. The New York Yankees had a similar record in the '98, '99, and '00 series with 22 wins out of 25. In the 2009 NLCS series, the Phillies scored ten homeruns and thirty-five runs - a record that has never been done before in only five games. Off to the World Series they go! Good luck! ~ Kay

The Howard familly of Saint Louis, Missouri, welcomed Ryan and his brother into the world on November 19, 1979. Now at age 29, 6'4'' first baseman is one of the starring players for the major league baseball team, the Philadelphia Phillies.

Ryan's pro years started in 2001 when he was drafted into the Reading Phillies, minor league team for the Philadelphia Phillies. It didn't take long to become the Most Valuable Player (MVP) in the minors two years in a row (2003-2004), and set homerun records in both Reading and the minor league.

Although his fans adored him in Reading, (we know, we were there!), everyone was excited for him when the Philadelphia Phillies brought the left-handed player into the majors on September 1, 2004. It only took him 10 days before he hit his first home run for them against the NY Mets. Not long after, he was chosen to be the National League's Rookie of the Year, only the fourth in his team's history to earn the status. In fact, he has broken numerous records set by the Phillies and the entire National League over the past few years.

Mr. Howard has hit a total of 222 homeruns (as of Oct.1), and hit 640 RBIs. For other statistics and information on his career, click on the link below.

We have enjoyed watching him play and wish him and his fellow players good luck in the future!

Photo & Research thanks to Wikipedia 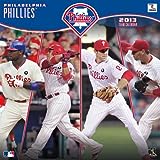 Fans have enjoyed cheering on the Phils at many locations in the city!

Baker Bowl, also known as National League Park and Philadelphia Base Ball Grounds, hosted the Phillies starting in 1887. Located on North Broad Street, the park was considered to be top quality of its time. The Phils earned their first World Series Pennant at this field in 1915. A memorable first for this field includes President Woodrow Wilson throwing out the first ball at that series. Babe Ruth made his premiere in the post season at the Baker Bowl in 1915, and in 1935, he played his final major league game there.

During the years of 1938 - 1970, the Phillies moved only five blocks west to Shibe Park (Connie Mack Stadium) which had been constructed as the first steel and concrete stadium of major league baseball in 1909. The Philadelphia Phillies team joined together with its rival pro baseball team, the Philadelphia Athletics or A's, to share the field in order cut down on expenses for both teams. This arrangement lasted until 1955 when the Athletics moved to Kansas City. The Shibe had seen many exciting events during its existence including seven World Series by the Athletics, and one World Series win by the Phillies. The Eagles football team also played at this field from 1940 - 1957.

Above Photo of Shibe Park from Wikipedia

As part of the South Philadelphia Sports Complex, Veteran's Stadium was filled with crazed Philly Phans from 1971 - 2003. Its location on Broad & Pattison has hosted not only the Phils, but also the Eagles and several concerts and events. The Vet was to be the location of the Phillies 1980 World Series win against the Kansas City Royals, and the National League Championship wins in 1983 and 1993. The Eagles also have won the Super Bowl at the Vet. Unsafe conditions and a serious accident in 1998 at the Army-Navy game forced the teams to start searching for a new location. Veteran's Stadium was demolished in 2004 by implosion.

I personally remember that day with mixed feelings. Although I was happy for the new stadium and the safer conditions for players and fans for years to come, I also felt the demise of an era. Many exciting memories of attending first professional baseball games, cheering the team whether a win or a loss, enjoying thrilling games, performing half time shows for the Eagles games, and attending concerts will not be forgotten by this Pennsylvanian!

Citizens Bank Park, the current home of the Phillies, opened its doors in 2004. It seats over 43,000 people and is part of the beautiful new South Philadelphia Sports Complex. Located near by are the Wachovia Center, Wachovia Spectrum, and Lincoln Financial Field. The Phillies have already made fantastic history at the park in 5 years with 2 National League Championship wins in 2008 and 2009, and a World Series win in 2008. Philly Phans wish them continued success in their future games and seasons!

Located in Citizen's Park Bank in Philadelphia, the Philly Baseball Wall of Fame contains plaques of players, coaches, managers, broadcasters, and anyone who has made a significant difference in the history of the baseball club. 66 inductees have been added to the wall as of 2009.

As sure as Philly loves cheesesteaks! 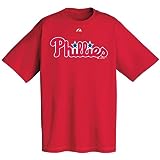 Philadelphia Phillies Official Wordmark Short Sleeve T-Shirt, Athletic Red (Large)
Show your support of this fabulous team by wearing some Philly Gear like this traditional red t-shirt! It is one of those things that nearly everyone in the city and suburbs owns along with a red baseball cap.
Buy Now 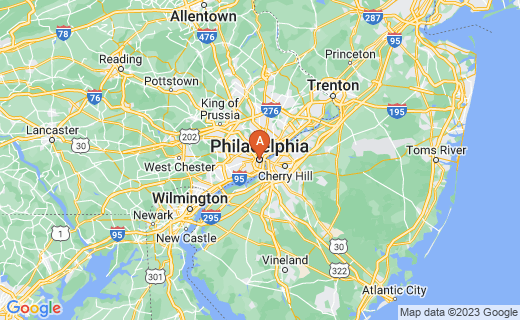