The first time I went on the submarine ride, they still were making TV sets that played shows in black and white. That's a long time ago. The ride was fun, full of fake creatures, underwater volcanoes, and a coral reef. If memory serves, there may even have been a "mermaid" out there, too, in those days. But Disney does what Disney does best: take something normal and improve upon it with a sprinkle of imagination and a dose of goofiness.

I just visited Disneyland about a week ago. The submarine ride is the same as it always was - except that it's not. So, the seats still face one way - to the side. The sub appears to move more than it actually does in reality (how do they do that?). The illusion of completely submerging underwater is still pretty good. So, I appreciate the magical part of the ride where it feels like I'm going down, on a deep-sea voyage, when the actuality is that I might have moved a few inches down and gone a few feet forward. There are lots of bubbles floating upward when the sub moves in a supposed downward direction. It made me smile, actually, and brought back memories of that seven year old riding the attraction for the first time.

Then, a surprise... Again, through a type of optical illusion, I see a talking clown fish and his friends in scenes from the Finding Nemo film, only I am seeing them from the submarine window... er, porthole. I keep bobbing my head around to "see" how they fooled me. Mirrors? A computer projection on the window? It's a very good trick. Even my fourteen year old can't figure out how they got cartoon characters out there in the water. If they can fool my fourteen year old, I'm impressed. I thought it was just me and these old eyes... Ah! The ride has improved, I think to myself. Well played, Disney. Well played. 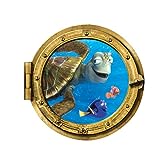 By The Way, Nemo Is A Fish

Some folks my age or older don't know who the heck Nemo even is. So, I'll share a little about him. He's a cartoon talking fish "child" from a movie. In the film, he gets lost from his dad but the movie is not that much about him! It's really about his dad, ironically named Marlin, and his dad's quest to find him. While on the quest, Nemo's dad, Marlin, meets new friends that help him to find Nemo. It's a story about parenting, really. It's all about how to let go when kids are ready to leave. Well, there's a whole lot more to the story that were pleasant surprises, so I won't spoil it with the details.

But let me share this with you. I am not a cartoon lover. I don't watch them, try not to watch them, and am usually dragged (reluctantly) to the theater at someone else's expense if I go at all. So, it was a few years ago that I was requested to watch this film with some small people I refer to as my children. I don't normally even buy the popular movies on DVD or Blue Ray. Yes, I'm one of those evil parents that make their kids wait for it to come out on Netflix. But, this time another relative was involved. She had purchased the brand new DVD and would we like to watch it at her place? With three jumping monkeys in front of me chanting, "Yes! Yes!" my head inexplicably moved up and down in the affirmative, though on the inside I was cringing. But that was before I knew it was a movie about adults and a specific breed of adults: parents. What? Disney made a movie about me? Wow, that's actually something I'd like to (maybe) watch. It turns out there is huge comic relief in the film, in the form of Dory (voiced by Ellen DeGeneres), another fish that Marlin meets. There are other parent fish and creatures in the mix. It ends up (gulp) that I actually like this movie. Presto! Disney has done it again!

The Ride Used To Include Real Girls As Mermaids!

Combining The Nemo Movie With A Traditional Ride

The submarine ride at Disneyland was opened in 1959, a grey submarine, but was in later years changed to the color of research submarines. The yellow submarine resembled the real ones the Navy used at the time and the original construction was overseen by an Admiral, with the work also completed by a military contractor (General Dynamics) that had built the first real-life subs. Despite the great care taken in the creation of the subs, they are actually boats that never fully submerge and that run on tracks in the lagoon built for them. In 1998, then Disney park president, Paul Pressler, closed the ride and the failed-movie, Atlantis, was rumored as a possible contender in the revamping of the ride, but the idea never materialized and the attraction remained closed until 2007, when the addition of the Finding Nemo characters was completed.

There is a small population of folks out there unhappy with the results of this ride. They are either purists and never wanted the ride to change at all or they don't like the Pixar film style (as opposed to the classic Disney animation). There are also a few out there who don't value the animatronic features. To them, I say, you should have seen the animatronics in the old days! Actually, the animatronics of the days past was cutting edge at the time and I appreciate there is a "shout out" to us older folks visiting the park since it is a very small part of the new and improved experience. I believe the ride is the better for the changes, reflects the new Disney animation style, and is a credit to the growing area of digital animation - the way of the future... perfect for a ride found in the futuristic "Tommorowland."

Do You Like This Ride The Way It Is Now?