Pretenders to the Real Game

Rugby, or Rugby Union Football, is arguably one of the oldest forms of football still played by significant numbers of people. Mayan Football may be one of the earliest forms, but the practice of including human sacrifice in the game has seen it die out. Australian Football fans like to think they are special, and to be fair they have the best outfits, from a women's point of view, but they are derivative. As for American football, again a variant of the older Rugby Union.

The standard, and quite possibly apocryphal, story is that in 1823 a pupil at Rugby School in England, picked up the ball and ran with it during a football match. In fact the origin of rugby may trace all the way back to a game recorded in Cornwall in 1602 as "Hurling to Goal".

How then did a game originating in English Public i.e. very expensive School become the national sport and national obsession of New Zealand, a tiny agricultural country ½ a world away?

Rugby was introduced into New Zealand by Charles Monro, who had learnt the game while a boarding school in England. He returned to his home town of Nelson, and arranged the first rugby match, between Nelson College and Nelson Football Club, on May 14, 1870. Even earlier in the 1850's rugby was reorded as being played at Christ's College in Christchurch.

However New Zealand and few passable roads in the mid 19th century and the national New Zealand Rugby Football Union was not formed until 1892.

Only 6 years later, in 1888-89, an unofficial "natives" i.e. predominately Maori, team had toured Britain winning 49 of its 74 matches. In 1904 the "All Blacks" as the national team had become, and still is, known bet a visiting British national team. In 1904 in their first international tour of Britain, France and North America they won 34 or 35 games - and the 35th game, lost against Wales, is still argued about to this day!

So early success was certainly the start of the great New Zealand obsession with rugby - as a still colonial country we could beat the mother country at something! Rugby had split from Rugby League when league became a professional game. Rugby Union was amateur up until 1995. The great New Zealand teams of the 20's through to the 80's were dominated by large men who kept fit in the off-season as farmers, foresters or other physical outdoor occupations.

In recent years it is fair to say that New Zealand has become a little less rugby-obessessed but even as a rugby-phobic New Zealander I can admit to a tear in the eye when I see the All Blacks do the the traditional haka, a Maori ceremonial challenge designed to frighten your opponents at the start of the match. Maybe the Mayan tradition lives on a little in the South Pacific? 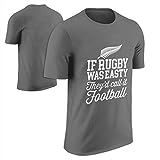