Visiting new places and venues can be educational and entertaining. I am pleased to share this fun experience with you.

The fans of the St. Louis Cardinals baseball team have plenty of reasons to smile and gather up gift items and sports memorabilia from this team who has brought victory to their city over and over again. Only the New York Yankees have had their team players win the MVP (Most Valuable Player) awards more often. MVP awards for the Cardinals equal twenty verses twenty-two for the Yankees.

Comparisons to the Yankees exist in other ways as well.

Both teams have won a World Series playoff after moving in to a new home stadium.

The St. Louis Cardinals only trail the New York Yankees in the total number of World Series that they have won! The Yankees have a bigger lead in that respect, a whopping 27 compared to the Cardinals 10...but that is still an accomplishment to be in second place when it comes to World Series wins as of 2010. We shall see how this year and subsequent years impact this record.

This baseball team was not always called the Cardinals. They started life as a professional team in 1882 as a part of the American Association and were known as the St. Louis Brown Stockings.

Unfortunately (or perhaps fortunately?) the American Association went bankrupt in 1892 and that is when they became a part of the National League.

For one year in 1899 they were called the St. Louis Perfectos. The color of their team uniforms was a shade of red which eventually led to being called another name.

The Cardinals became their final and lasting name in 1900 and the St. Louis Cardinals have been pleasing their fans for most of that time ever since those changes took place.

This modern stadium which held its opening season in 2006 and which is located in downtown St. Louis, Missouri holds 46,861 cheering fans not far from the mighty Mississippi River.

It cost 346 million dollars to construct and is actually the third incarnation of a stadium with that same name.

Professional baseball was first played in what was called Sportsman's Park from 1882 to 1892. Moving then to Robinson Field from 1893 until 1920 once again the Cardinals moved back to Sportsman's Park.

In 1953 the famous beer dynasty of Anheuser-Busch purchased Sportsman's Park, renovated it and renamed it Busch Stadium.

The new ballpark and the third to be named Busch Stadium is thus the fourth home to the St. Louis Cardinals. Baseball and football is played at different times of the year but St. Louis now just has one Cardinals team for which to root. The football team also named the Cardinals now resides in Arizona.

He was very athletic and also played basketball good enough to earn a college scholarship. But baseball was a love of his and this man known for his harmonica playing as well as modesty and sportsman-like behavior has been honored with many accolades.

Stan "The Man" Musial is considered to be one of the best baseball players right up there with the well known Willie Mays. Both of them were appointed as All-Star selections 24 times!

Stan Musial took part in 3 world championship teams and became a member of the Hall of Fame in 1961.

A statue of him with his well known batting stance is situated right outside of Busch Stadium.

As if that was not honor enough, on February 15, 2011 President Obama gave Stan Musial the Presidential Medal of Freedom which is the highest civilian award bestowed upon anyone in the United States for "an especially meritorious contribution to the security or national interests of the United States, world peace, cultural or other significant public or private endeavors."

The St. Louis Cardinals were fortunate to have "Stan The Man" as well as many other notable players on their winning baseball team over these many years.

For people reading this who may not already know, the St. Louis Cardinals play in the Central Division of the National League along with these other teams:

The opposing American Baseball League also has an East, Central and West Division with a total of 14 member teams.

At the end of each season the winning team of the National League gets to play the winner of the American League in a World Series playoff. The St. Louis Cardinals have had much practice and success over the years getting to play and win many of those World Series!

Years In Which The St. Louis Cardinals Have Won The World Series.

My mother and I got to see some of St. Louis, Missouri when visiting a friend who lives just outside St. Louis some years ago. While we did not get to take in a baseball game, we were able to see some of this marvelous city that consists of many different ethnic neighborhoods each with their own unique character.

Probably the most striking and iconic symbol is the St. Louis Gateway Arch of which we saw from the outside but due to renovations we were unable to tour.

Busch Stadium is another major feature of the downtown landscape.

Grant's Farm and the Missouri Botanical Garden tours were among other highlights of visited sites while we were visiting that fine city.

Taking a paddle boat ride on the Mississippi River we were able to see much of St. Louis from that perspective and the river lends its own unique ambiance to this city.

St. Louis has much to offer visitors as well as local residents and the St. Louis Cardinals comprise a portion of what makes sports enthusiasts proud to live there. This team has such a rich history of Hall of Fame players that to list them all here would have lengthened this post needlessly. Hope you enjoyed this introduction to the St. Louis Cardinals and a bit more about various aspects of this award winning team as well as a glimpse of the city that they call home. 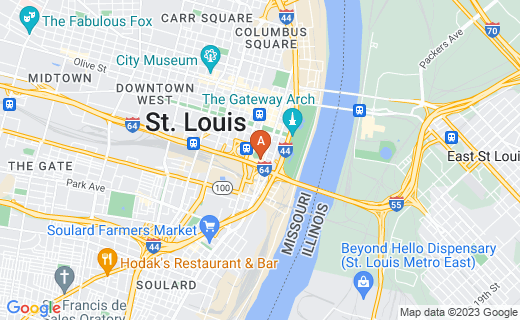 Are you a St. Louis Cardinals fan?