Weight has no importance in the absence of gravity, so NASA felt the need to search for alternative forces to improve the astronauts trainings while in space, and together with some experts, namely kinesiotherapists, they have found a great solution, which is the powerball, that uses centrifugal force instead.

Explain me how the powerball works

Ok, you're the boss... Think of a small plastic bottle with a little iron ball inside. If you start shaking the bottle, the ball will start spinning in the interior, generating a good amount of centrifugal force, and the faster it spins, the most difficult it is to change direction.

The powerball developed by NASA uses exactly the same principle, but it has a slightly different design, created to maximize the centrifugal force generated by the movement. At a speed of 10.000 rpm (rotations per minute), the generated force will be a bit larger than 75 times the weight of the powerball rotor (the heart of the beast), which is about 200 grams (0.44 pounds), what gives us approximately 15 kilograms (33 pounds).

See on the end of this hub for a link to the wikipedia article about powerballs. 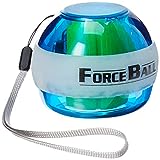 And what can the powerball do for me?

The powerball as proven to be a great exercise for your arms, shoulders and back, and it's a great training gadget for dozens of sports who make great use of arms, like golf tennis or squach, or even baseball, basketball or wrestling. But the greatness of the ball is that you can use it while you're in front of your computer reading an hub for example. The benefits for the muscles it works on are strength and flexibility increase, and improvement of coordination.

Musicians can benefit from exercising with the powerball, mainly drummers and guitar players, and there's also some common muscle injuries that can be prevented by the use of the ball, like Carpal Tunnel syndrome or RSI (Repetitive Strain Injury), or some sport related afflictions, like Tennisarm or Golfer's Elbow.

What about your own experience?

I bought my powerball about one year and a half ago, when I saw it at a scientific TV show. Initially I used to spend five minutes a day just exercising with it, bet then I started to pass some days and the full weeks... Now I just keep it around, and whenever I sit down in front of the computer or television, I play with it, and it don't even disturb my thoughts, is just like those foam made stressball that we squeeze just for fun, but with the powerball I'm exercising at the same time. But it gets worse, they are really addictive...

And don't think of it as something that will get you really tired. Unless you do like the guy on the video below this capsule, and try to break world records, you won't feel practically anything, like muscular pains or week arms. Is just like if you've never used it.

Here's a video of a powerball world record

If you have a powerball or already used one, what's your hubpages style feedback?

From my point of view, powerball it's a great, cheap and pratical way of exercise, and for people who spend much time in front of a computer it's just a must. And for me it's even greater because of my weird work schedule, were I can be two weeks doing nothing followed by three of physical job, followed by two more of inactivity, etc, etc. It's a way of keeping my muscles occupied.

I've found out that the powerball is not really a NASA invention, as I had seen on a television show and on many other websites, although they use it and have made some studies about it. Who's the real inventor is a question I still wasn't able to find an answer. I'll keep the remaining of the hub untouched, but I wanted to clear this out. Here's a docuent that proves what I'm saying right now: