These guys were brought in to help the team win, but couldn't accomplish anything on the field. Today I rank the top five worst draft picks by the Los Angeles Rams

He was seen as the next great running back, but was the source of too many turnovers.

After starting his college career at Georgia, Cleveland Gary transferred to Miami after his freshman year. He set a school record for most catches ever in a single season by a running back with 57, a record that stills stands today.

Gary was selected 26th overall in 1989. He wasn't terrible for the Rams, as he led the NFL with 14 touchdowns in 1990, but he just couldn't hold on to the football. He fumbled 12 times in his career and averaged less than four yards per carry for his career.

He was brought in to replace a superstar, but couldn't match the production.

Green was selected 14th overall in 1988. The Rams had just traded away Eric Dickerson, the Rams were in need of a feature running back. Green was a major failure. He was to small to carry the load of the offense and rushed for less than 500 yards during his three seasons with the team. He even changes his jersey number from 30 to 44 to try to look tougher. What has to hurt Rams fans the most is Green was named All-Pro and a pro bowler in 1991 with Denver.

He was never anything more than a backup to Hall of Famer Marshall Faulk.

At Arizona, Trung Canidate was a staple of the Wildcat's offense. At his pro day, he ran a 4.25 in the 40 yard dash.

Canidate was selected 31st overall in 2000. With the addition of Marshall Faulk in 1999, there was much confusion with such a selection and most fans thought of it as a wasted pick. He started only three games in his three seasons with St. Louis. He was drafted for his quickness and speed, but he was undersized and was prone to fumbling. He was traded to Washington in 2003.

He was brought in to replace a future Hall of Famer Orlando Pace, but failed miserably.

At Baylor, Jason Smith was a dominant pass protector. In his senior season, he gave up just 3.5 sacks and was only penalized five times.

Smith was selected second overall in 2009. He struggled all year at right tackle as a run blocker and missed the last half of the year sue to a severe concussion. The next season, he lost his starting job to 2010 rookie Rodger Safford. Smith was released after 2011 and has failed to start anywhere else. To think St. Louis could have picked Michael Crabtree, Jeremy Maclin, Percy Harvin, or Hakeem Nicks at that spot.

His off the field law breaking became the focus of his time in the league.

By his sophomore year at Nebraska, Lawrence Phillips became the focal point of the offense. He tied a school record by rushing for 100 yards or more in 11 straight games in 1994 despite frequently playing against eight or nine-man defensive fronts. During his time in Nebraska, he led the team to back to back national championships. Midway through his junior year, he was suspended for assaulting his girlfriend which raised questions about his character.

Phillips was the sixth overall pick in 1996 by St. Louis. The Rams fell into the conceit that affects all NFL teams at one time or another. They feel that if we can just get this super-talented player into our controlled environment and show him a little “tough love”, we can turn him around. Phillips only played for the Rams for one and part of a second season. He attempted a comeback in 1999 but his skills had eroded too much by then. After holding out of practice in dispute of playing time, the Rams were forced to release him. Since his retirement, he had been arrested multiple times and was serving a 31 year prison sentence before committing suicide in 2016. 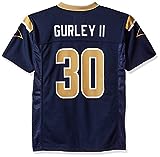 Which Ram was the worst draft pick?