So, how did we end up eating lunch at the Nine Dragons? Simple. Some of the restaurants around EPCOT offer a dining experience that offers priority seating for the Candlelight Processional. While that is another article entirely, it is worth doing and the best bet for getting a seat is the dining option.

This was the only restaurant that had open seats besides the Rose and Crown Pub at the UK pavilion. My parents didn't want to eat 'pub food' and they figured they liked Chinese food so they booked the Nine Dragons. I was personally worried that we wouldn't enjoy it. A few years ago we ate at the steakhouse in the Japan pavilion and we didn't enjoy it. Why? because we were used to the Americanized Japanese food so the didn't have the taste for the authentic Japanese food. My concern that that the authentic Chinese food would be a disappointment as well. I am pleased to say that I was wrong. So very wrong. 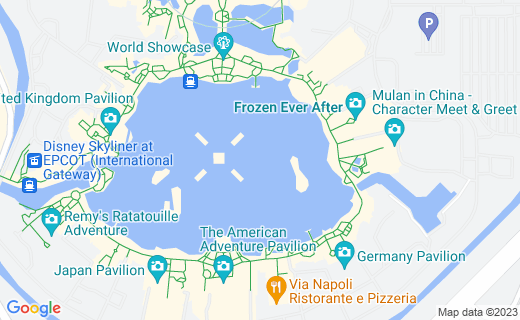 The restaurant itself is absolutely beautiful. The artwork, the décor, and the lighting really makes you feel like you are in China. Which, after all is the whole point.

We were warmly greeted when we walked in. Even though we were more than fifteen minutes early for our reservations they seated us right away. It was nice since were were tired and hungry from walking around the parks all morning.

My brother got just as many shrimp in his fried rice, 6 whole shrimp, as I got in my entrée that was specifically shrimp and noodles. The spinach noodles could be ordered as a side time. I think next time, should my mom (who doesn't eat shrimp and asked for hers to be let out) gets the fried rice (which she will I'm sure) I will just order the spinach noodles and eat her shrimp. It saves money and food. Honestly, most of the portion sizes are big enough that they could easily be shared, especially if you have already split an appetizer.

To be completely honest, I could have easily made a meal out of my appetizer. I'm sure that if you were looking to save a little that you could order a couple appetizers for a small group and that would be plenty sufficient for a meal.

I will start by saying we would not have ordered so much food if we had not been doing the Candlelight Processional package. We each were able to pick an appetizer, entrée, and dessert. We also had our pick of any non-alcholid drink, so long as it wasn't one of the smoothies.

My mom and I both tried the jasmine iced tea, and it was absolutely amazing. I wish I could have it all the time. My brother got the strawberry mango smoothie, and he said he really liked it. My dad just got a coke, which tastes the same everywhere in America.

We each got a different appetizer. My brother and I shared, kind of. By sharing I mean I gave him one of my potstickers and I ate three of his dumplings. His appetizer could have easily been a meal. He had been warned that his option was spicy, and it was. Not unbearably spicy, but it did have a bit of a kick to it. I think it is toned down from what it would have been if we had really been in China. I will say that my dad said his soup was the best soup he has ever had.

My mom and my brother were a little unadventurous and got the fried rice. But, it wasn't like the fried rice you get from Chinese takeout. It has chunks of chicken, ham, and whole shrimps. My brother got just as many shrimp as I did and I ordered shrimp as my meal! I really enjoyed my pepper shrimp and spinach noodles. It had a very flavorful garlic sauce. The shrimp was exactly like it said with would be, covered in cracked black pepper. My dad got a spicy chicken dish with rice, which he said was rather good.

There were only two options for dessert. I was the only one that got the ginger cake, everyone else got the caramel ginger ice cream. The ice cream was very refreshing and the cake was light. I was clearly the hungriest person in my family as I ate all my food and then most of my brother's...

Would you be adventures in your ordering at the Nine Dragons?

The staff was very helpful and polite. They were able to answer questions about the many different menu options and were honest about whether or not they thought we would enjoy it. It was also nice talking to them about what it was like growing up in China and how they are liking their stay in the United States. It always makes me laugh that no matter what country the cast members are from (including many of the cast members from various African nations at Animals Kingdom and Animal Kingdom Lodge) they all want to visit Texas while they are in the states. Many of them will even ask about where you are from, because they are so interested in traveling while they are here.

We really enjoyed our lunch at the Nine Dragons. We were so full from lunch, which was around 1pm, that we did not eat again until 8:30 when we had a snack while watching the Packers game back at our room. (As much as I love Illuminations it was just too cold to stay, which is sad because it is one of my favorites.)

The meal was relaxing and the staff never tried to rush us out. I would definitely come back here again. I also highly recommend it to anyone looking for a nice meal that is a little adventurous with their food.