Earvin was a 90s kid that never quite grew up. He has his GED and a pretty sweet girlfriend.

What Could Have Been

Feel free to watch the video just below this text, if you're not keen on reading for some odd reason. Or maybe you'd like to follow along! There are things in this writing that didn't make it into the video, so keep that in mind.

We all know the story of Carson Palmer. Highly sought out of USC, picked #1 overall in the 2003 draft by the Cincinnati Bengals, but in his rookie year he sat behind Jon Kitna. Remember him? Well anyway, Palmer WOULD be the starter in his second year and bring the bengals to an 8-8 record in 2004. After a great 2005 REGULAR season, he signed a $118 million extension and everything was peachy.... until they played the Steelers a couple weeks later in the playoffs. Ouch. Kimo von Oelhoffen, who (fun fact) was drafted by the Bengals in ’94, ended the hopes of Bengals fans and not even Jon Kitna could save them. Palmer DID make it back before the beginning of the 2006 season as he promised, but he was never the same. For the next 5 years, the Bengals saw the playoffs only once, in ‘09, and were booted out immediately by a rookie QB that had taken the league by storm named, Mark Sanchez. Anyway, After the 2010 season, Palmer demanded a trade, and was willing to retire if his wish wasn’t granted. He sat out all season until a familiar face was in need of a quarterback. Hue Jackson! Jackson was a coach at USC and in Cincinnati before he took his position as head coach in Oakland. But what if the Raiders hadn’t made that trade? What if Carson Palmer retired and never laced up his cleats again? Let’s take a look and see exactly what could have been, specifically for the Raiders. The Bengals storyline wouldn’t change much.

With Palmer sitting out in 2011, the Bengals would still need a quarterback, and still would’ve drafted Andy Dalton. He was a fringe 1st round talent with mobility and great upside. He was a natural fit and a natural red head. Meanwhile in the AFC West, an old buddy of Palmer’s was finding some success with the Raiders! Hue Jackson was the new coach in town and Jason Campbell was his quarterback. After finishing 2010 at 8-8 (6-0 in the division) the Raiders were looking to build on that momentum. They got out to a 4-2 start until well.... let’s just say Jason Campbell needed a vacation. In the original storyline, the Raiders traded their 2012 1st round pick, and 2013 2nd round pick for Carson Palmer. Those picks became Dre Kirkpatrick and Giovani Bernard, but remember, in OUR story, Palmer stays retired so those guys may or may not become Bengals. The Raiders only needed a place holder. Someone to hold the fort for the rest of the year. Owner Al Davis was big on Jason Campbell before he died, and Campbell kept the Raiders in the playoff hunt while he was healthy. Their best bet was to stick with what they had on the depth chart, or sign a free agent. Why not Jake Delhomme? The Texans actually DID sign Jake Delhomme in November, but in our scenario, he becomes a Raider in October. He finishes the season for the silver and black and the team goes 7-9.

Not making the boneheaded trade for Palmer means that Hue Jackson can keep his job. Peyton Manning still signs with Denver. Now it’s time to build to beat a Hall of Famer. So NOT dealing with the $12.5 million cap hit of Carson Palmer, and making a few roster adjustments to provide cap space, the Raiders re-sign Jason Campbell to a 2 year deal and land Mario Williams in free agency. With their 1st round pick, they select Chandler Jones! More getting at the QB. They don’t pick again until the end of the 3rd round, and with that pick, they take the speedster Travis Benjamin. Typical Raider pick. Also in this draft, the Bengals don’t take Dre Kirkpatrick because they don’t have that option. No biggie. Late in the draft, the Raiders take a DB named Jeremy Lane to help shore up the pass defense. Going into the 2012 season full of confidence, the Raiders led by Jason Campbell, come out firing on all cylinders. Behind a nasty defensive line, a coach that’s wise beyond his years, and an offense that stretches the field, they start off 3-0 before they get their first dose of Peyton Manning. Manning leads his team down the field to kick a last minute field goal. The Raiders go into the bye week totally bummed, and morale begins to drop. The rest of the season, Campbell has his ups and downs, finishing 9-7 and narrowly missing the playoffs. McFadden missed too many games and the running game suffered.

How would you solve your QB situation after Campbell went down? 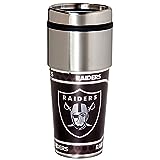 In the 2013 draft, the Raiders trade back in the first round and take Manti T’eo. In the 2nd round, they draft the troubled Tyrann Mathieu as he looks to be the next Charles Woodson, he’s a natural fit. The offense is ready once they lock in Darren McFadden and sign rookie Latavius Murray. In 2013 the Raiders go 11-5, sweeping the Chargers and Chiefs but losing both games to the Broncos. That’s okay, because they meet for a 3rd time in the AFC Championship game! That’s right, an all WEST extravaganza in both the NFC AND AFC. This time, the Raiders are battle tested and ready. Darren McFadden scores the go ahead touchdown on a shovel pass and the Honey Badger seals the deal with an interception on 2nd down at Oakland’s 37 yard line. The Raiders would have a lead late in the Super Bowl when it appears that Russell Wilson fumbles! But on further review, his arm was moving forward making it an incomplete pass. On 3rd and goal, Marshawn Lynch takes the handoff up the middle and the Seahawks etch their names in the history book, 20-16. Jason Campbell retires, none of this ever happened, and Derek Carr gets drafted with the 31st overall selection.

Raiders fans rejoice, for what could have been a terrific season. And remember why you were in this position in the first place. Jamarcus Russell. See ya!