Why Antonio Brown is Worth the Risk for the Ravens!

Lamar Jackson and the Ravens offense would benefit tremendously from adding Antonio Brown. The Ravens already made a huge difference to the front line of their defense by adding Derek Wolfe and Calais Campbell. The Ravens acquired Campbell from the Jaguars for just a 2020 fifth-round pick.The Ravens love value pick-ups. A five time pro bowler and 2019 Walter Payton NFL man of the year for a fifth-round pick screams value.

Antonio Brown could easily be picked up at value for the Ravens. Now that his 8 game suspension has been announced, not that many teams are going to want to take the risk. However, that means the Ravens can get the seven time pro bowler at a great price.

The Ravens are stacked at running back with Mark Ingram Jr, Justice Hill, Gus Edwards, and the addition of J.K. Dobbins. J.K. Dobbins averaged over 7.0 yards a carry as a freshman, running for 1,403 yards and 7 touchdowns. Then in his final season as a junior, he ran for 2003 yards (6.7 yards a carry) and a whopping 21 touchdowns. I am not sure how he even fell as far as he did.

So again, I say the Ravens love value! They do their research and then they benefit from other teams who don't do their research. They aren't lazy and I guarantee they are weighing the pros and cons right now for this.

Note if you are planning to have friends over for the games this year, get yourself a grill! 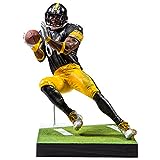 The Real Question is WHY NOT?

Why shouldn't they Ravens sign him? Yes, we all know of the legal troubles that come with Antonio Brown. But what about the pay out? He is a beast! As a Ravens fan, we saw this all the years he was in Pittsburgh. Why not give Brown a contract that comes with certain incentives for him to perform?

Even if Brown does come with issues, don't give him any guaranteed money and cut him. It is a win-win opportunity. I think the Ravens are a great fit for someone who has had issues because they hold each other accountable.

Also, Antonio's cousin would be playing on the other side of the field! That would be awesome to watch! Lamar even loves the idea and believes the brotherhood in the locker room would be a great thing for Antonio Brown.

Just imagine Brown on the Ravens as you read this. He would open up so many opportunities for the offense to be even more dominant. They already dominated rushing before adding J.K. Dobbins. They did take a loss from Marshall Yanda retiring, though.

If AB was to be double teamed by defenders, it opens up opportunities for Hollywood Brown and Miles Boykin to get mismatches in single coverage. And it also makes it so much easier for Lamar Jackson to dominate the run game even more! Teams could not focus on stopping Jackson from running for long gains if they have to worry about stopping Antonio Brown too.

AB could also bring a lot of experience to the WR position for the young guys on the Ravens. It would also piss of Steelers fans, and who doesn't want to do that?

I can't think of many things that would make Ravens fans and AB happier than to play Pittsburgh twice a year and beat them with their former pro bowler doing the scoring.

Because of the PR nightmare that usually comes with AB, he doesn't seem at all like someone the Ravens would normally sign.

And because of the pandemic it seems that an 8 game suspension makes it possible that Brown won't play at all. But it all depends on how the season unfolds. This is part of why I believe it is worth the risk. There is already so much focus on teams because of coronavirus.

It wouldn't be a big deal to take some of the focus off that and let it be on what Brown is doing. Even if it is for one year while our young guys build up, such as third round pick Devin Duvernay. AB could help the Ravens win a superbowl. Lamar Jackson is amazing! He is the MVP, but he can't be the only playmaker on the offense.

I am not saying we don't have great players on our offense, but we need another player that can go out when we are down by two scores in the 4th quarter and perform under the pressure. Mark Ingram is a beast, but he isn't going to make that many plays that bring us back when we are done by a lot. We need that on the field.

In my opinion, it is worth the risk and sacrifice because we should have more superbowls in Baltimore. Period. We have only been around since 1996 and have been one of the best drafting teams and playoff teams period. Let's not let something as simple as bad PR stop us from taking a great player at a great price.

Also, check out my blog on medium for more great posts @williamkosko

Stay safe during the pandemic and #maskup!