When India's Mary Kom won her fourth World Championship boxing tournament in the incredible third round of her match with Germany, she was declared "Magnificent Mary."

The first two rounds were gruesome for the formerly aggressive winner, but she had just learned of the surgery required to repair the heart of one of her young twin boys. Her husband had handled all the child related chores during the surgery, but felt he had to let her know of surgery. She was affected by the news.

In her biographical film, Mary was barely active during her first two rounds, but became alert in the third and final part of the match to hammer her un-sportmanlike opponent, who had a long history of disrespect for other boxers and trainers.

It is difficult for me to watch boxers of any gender as they are pounding or being pounded in the head, but this is their sport of choice.

Mary has loved boxing since childhood and I have not understood why, but I respect her choice. I remember prejudice against me for my practice of martial arts as a woman -- Part of the reason that women continue these sports is to negate the prejudice and belittling of naysayers and to live their own lives. M.C. Mary Kom does that very well.

Mary has won cash for her 2012n Olympic Flyweight Bronze Medal and another $500,000 awarded (as of 2014) in recognition of her achievements by government agencies in India, raising the standard of living of her rice-farming parents, her own family, and her community. She is an inspiration for girls in her state and country. I think she also helps in being an example of good self defense to so many girls ages 8 to 18 who are crime victims. 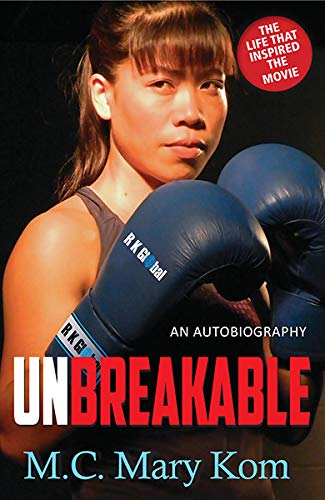 Unbreakable -: An Autobiography
Mary Kom is an advocate and example for Indian girls, especially those faced with discrimination and the threat of abduction. One girl between ages of 8 - 18 is stolen every eight minutes in India. Self defense helps and boxing makes money. Mary has been married to a soccer player and hd three sons in recent years, while returning to her training without neglecting her family. Her father, a rice farmer, was a wrestler. Her parent's major concern was with avoiding facial injuries that would make her unmarriageable, but a few bruised cheeks did not scare away the husband who cheers her on.
Buy Now

Not many theaters in my large Ohio city have shown this film, but Indian-language films are gaining momentum in Columbus, Ohio. Check your local theaters for screenings of Mary Kom.

The characterizations of Mary's people are entertaining - her parents and little brother, the family cow, her future husband, her coach (who ties her twins to her back for strength), the bigoted local boxing federation head, the women on her national team, and even the boy she used to fight in high school. You will not forget them. 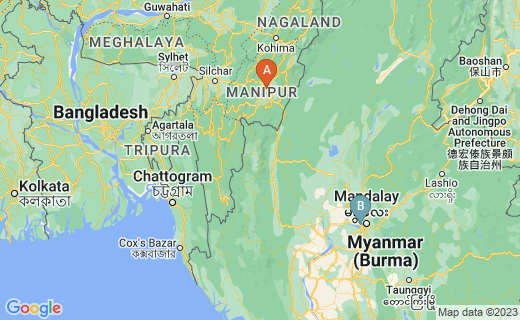 B
Burma:
Republic of the Union of Myanmar

Mary's autobiographical film is named simply Mary Kom and has English subtitles, as it was shot in Hindi. The dialogue is not difficult to follow, as one becomes accustomed to the subtitles early on.

Increasing numbers of Indian-language films have English subtitles today and I notice that Disney is creating films in India now. I have become a fan of good Indian films and have found a new world of information and entertainment through them.

The Wall Street Jourtnal reported that the film would need top be dubbed into Tibeto-Burman language of the local Meitei people in order to be acceptable in Manipur. (http://blogs.wsj.com/indiarealtime/2014/09/10/manipuri-theaters-why-we-cant-show-mary-kom/ Retrieved 9/9/2014).

Mary received prejudicial maltreatment for her origins in Manipur during her training and boxing career, but she overcame them.

Former Miss World Priyanka Chopra is also an advocate for girls and female safety in India, as well as for increased law enforcement efforts against personal crimes in Mumbai. She performed the role of Mary Kom from teenage to adult years with great determination and energy.

We need to remind ourselves that we women today are a vital contributor to the growth of the new India. True strength comes from the ability and the confidence of young independent girls like ourselves.

Much actual boxing among women occurred in the film and Miss World actually fell flat and received a cut under her right eye that was real. Unfazed, she continued the filming. Word is that the studio put makeup on the cut to make it look deeper. Priyanka trained for two years to handle the part of the boxing champion and she was mentored by Mary herself.