Amelie Mauresmo was a French tennis player. Her average success on the international scene did not reflect her talent. Amelie Mauresmo was vulnerable under pressure and her adversaries often take advantage of her psychological weakness. Her best tennis season was in 2006 when she won at the Australian Open and Wimbledon. Amelie Mauresmo retired in 2009 at age 30.

The greatest French female tennis player of the last 50 years retires at age 30 after a 16 years carreer. She made the announcement on December 3rd 2009. She lost her passion and felt it was better to retire. A very emotional moment for her. This is her official announcement at a press conference.

What does Amelie Mauresmo Do Now?

Amelie Mauresmo supports and represents l' Institut Curie who does research on cancer. She is very active in the organisation. You can see more on her FB page here: Les dÃ©fis d'AmÃ©lie pour Curie (in French) 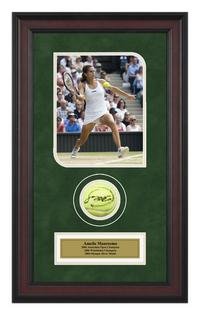 A Did You Know Fact About Amelie Mauresmo

In 2004 she played in "Les 11 commandements" movie. A french comedy (a pretty dumb one, similar to the "jackass" series) featuring some well known french stand up comics (Dieudonne, Michael Youn, Gad Elmaleh) as well as some athletes and celebrities playing their own role (Amelie, Djibril Cisse).

In 2005 she became one of the athlete to represent Reebok in the "I am what I am" advertising campaign. Before Reebok, she was sponsored by Nike. Some of her other sponsors: Babolat, Gaz de France, Dunlop racquets until 2007, she then switched to HEAD.

What Do You Think About Amelie Mauresmo

Amelie Mauresmo Fan (or not) sign in!! - Leave your comments below