Quiz: Do you know your baseball jargon?

How well do you know your baseball jargon?

From Spring Training through the World Series, Baseball Season occupies the minds of baseball fans. In early Spring there's talk about who's been traded and which team looks good for the season, on down through the final days of September as the Division races heat up and that 'Magic Number' for your favorite team dwindles down. These are all things that the seasoned baseball fan dwells on.

Are you one of those seasoned and knowledgeable baseball fans? Let's see how smart you really are. Do the baseball terms roll off your tongue like a professional auctioneer? If so, then you will have no trouble passing this baseball jargon quiz. If not, then you stand to learn a few of the essential terms of the game. After all, you want to know what the announcer is talking about, don't you?

Jargon refers to the vocabulary peculiar to a particular trade, profession, or group!

The 'Jargon' of the Diamond

The diamond has a language all its own;

If he attempts the "squeeze"

A play at which the fans belch forth a groan.

A safe drive to the field is called a "bingle";

If the hurler throws a "cripple"

And the batter clouts a "triple,"

The swat will put the nerves of fans a-tingle.

When a runner's left on base, 'tis said he "died,"

The pitcher's mound, the "slab";

Successful plays are certainly "inside."

When a player's making good his work is "grand."

But let him boot just one and he's "panned";

If he comes up in a "pinch"

The fickle fans will yell, "He should be 'canned.'"

Baseball has Influenced our English Language

The influence of baseball on American English is impressive from the standpoint that certain terms and phrases which started in baseball (or at least were given a major boost by it) in many cases have gone on to have much wider applications. How many of the following examples have you used, or heard used, in everyday conversation?

*Go to bat for

*It's a (whole) new ballgame

*Keep your eye on the ball

*Out in left field

*Two strikes against him

*You can't win them all.

"Yogisms" - The most well-known Baseball Jargon of all

Then we have the most famous of all baseball jargon -- Yogisms. One of the

career for the New York Yankees, Yogi Berra will forever be known for 'fracturing

the English Language' and giving us baseball phrases we love:

A Few of the Many "Yogisms"

"A nickel ain't worth a dime anymore."

"In baseball, you don't know nothing."

"I didn't really say everything I said."

"Baseball is ninety percent mental. The other half is physical."

and his most famous of all...

"It ain't over till it's over"

The quiz answers were provided by wikipedia!

I'm a huge baseball fan and talk & read about baseball all the time. I've taken the Quiz twice myself and STILL keep missing #6, so best I've done is 9 out of 10 correct. First time I only got 7 right -- and it's my own quiz!! :0)

How many did you get right?

A calendar in the shape of a Baseball.... with facts to test a fan's love of the game and the minutest detail of baseball knowledge. It doesn't need to be baseball season to enjoy baseball trivia! It can be enjoyed all through the year! 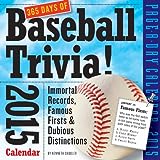 My favorite baseball expression to hear sportscasters say is...