The St. Louis Cardinals have been blessed with some of the absolute BEST managers in the history of the MLB.

Some believe that the fact that the Cardinals have consistently remained a top team in the MLB over many decades has much to do with the talent of their exceptional team managers. Among them are Red Schoentist, Whitey Herzog and Tony LaRussa. Here we take a closer look over many decades at Cardinals baseball managers.

Mike Matheny replaced Tony LaRussa as the MLB Cardinals manager in 2012. Just on the heels of the epic 2011 postseason run and World Series win for the Cardinals came the announcement of the retirement of Tony LaRussa. Matheny was selected among a huge pool of talent and that decision has raised much controversial discussion, mainly because of his complete lack of experience as a MLB manager.

Poll: Best Cardinals Manager Ever - In your opinion, who was the best St. Louis Cardinals manager of all time?

Choose one with a quick click. Comments on this poll are also welcome. You'll find that spot after you vote.

Which of these featured St. Louis Cardinal managers might you choose as the best ever?

While Matheny has a strong past in a Cardinal uniform and is highly admired by players and fans, many were surprised he was chosen as the new manager for the Redbirds. The main reason for controversy over this decision is the fact that Mike Matheny has zilch experience as manager of a MLB team.

Matheny has been an exceptional MLB athlete for 13 years, a multiple Golden Glove winner very highly respected by teammates, peers and fans. Supporters of Matheny do have reason to believe he demonstrates leadership skills deserving of a manager's position. Also Matheny and his family have been part of St. Louis for over 20 years, therefore he's firmly sewn in to the fabric of the town as a community.

The issue that Matheny has had no formal coaching or managerial experience on the professional level anywhere does raise eyebrows as a legitimate question or concern. Maybe the Cardinals needed to make sure that they chose a guy who can tone down the ego and not insist on being a know-it-all.

Rather than recycle older and more experienced candidates, Matheny might be considered more of a fresh start, one who is humble enough to learn with the team and handle the unlikely challenge of authority from team mates or fellow managers. Either way, the fact that Matheny led the Cardinals to postseason in 2012 says he's got what it takes. Cardinal Nation approves of Mike Matheny!

This portrait of La Russa reveals why manager Tony La Russa truly is "a man on a mission".

"Tony has a knack that is rare in managers. He can be friendly with his players and he can be a disciplinarian. He can talk with a player about a mistake and not make it seem like he's jumping on him." ~ Jerry Koosman

"As a manager he was always three innings ahead. A lot of times he would make a move in a game that I didn't understand and which I thought was pretty dumb. Later, I would ask him about it, and after our discussion I thought I was the idiot." ~ Jerry Reinsdorf

"He loves the game, he respects it. He loves the players. He is relentless in competing. He won't let up, no matter what." ~ Jim Leyland

Red Schoendienst enjoyed record-breaking MLB stats mostly as a player, and coninued his career in baseball as coach and then manager for the Cardinals for 11 seasons.

He was a coach for the Cardinals in the early 60s, then Johnny Keane resigned the day following the Cardinals' 1964 World Series victory over the Yankees, and Schoendienst was named as his replacement.

"He has the greatest pair of hands

Fans referred to Whitey's strategy an "Whiteyball" referring to his strategy that concentrated on pitching, speed, and defense to win games rather than on home runs.

White Rat: A Life in Baseball by Whitey Herzog 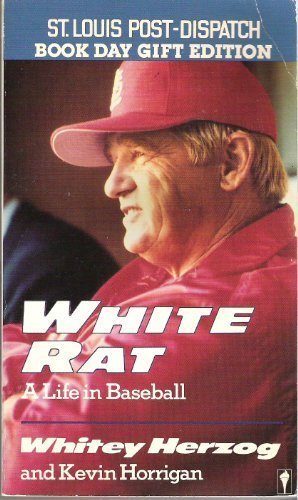 Herzog, another MLB Hall of Famer

In 2009 the number 24 was retired as Whitey was elected to the MLB hall of Fame.

Herzog was elected to the Baseball Hall of Fame in 2009.

At that time the Cardinals retired the number 24 which Whitey wore as manager.

Rick Ankiel was the last player to wear that number on the Cardinals team.

Got Comments about Cardinals Managers? Join the discussion below.