Even on an Oval Racetrack, You Can’t Win by Standing Still 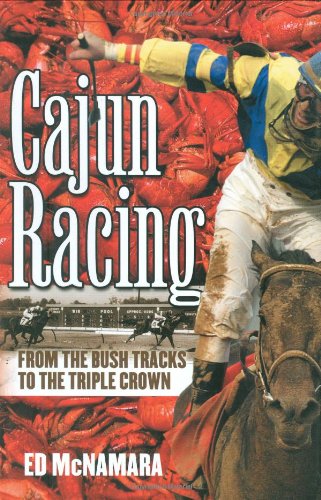 Cajun Racing: From the Bush Tracks to the Triple Crown
Buy Now

My Introduction to the Racetrack

As a teenager, I spent my summers with my father in a city not far from Ann Arbor, Michigan.

Some of my fondest memories of my visits with my father are of the times that we would make the short trip to Hazel Park, Michigan, to watch the harness races at the Hazel Park Harness Raceway.

My father would give me $2.00 to wager on each race, and whatever I won, I got to keep. In hindsight, I probably would have been better off keeping the money that I started with and not placing any bets, as I wasn’t the best at picking the winning horses. But, not placing any bets would take the fun out of going to the racetrack, wouldn’t it?

Well, that’s not completely true. You see there is something exciting about going to a racetrack, whether you place a bet or not.

It’s fascinating to just watch the horses as they get ready for each race and, as with any major sporting event, it is exciting to watch the events as they unfold before your eyes.

And, then there is the people watching.

As you are probably aware, there are some very interesting characters who hang out at racetracks, many of whom you probably only want to meet at the track given their dispositions and shady backgrounds. It is interesting to wonder how many of these people have made or lost their fortunes based on the results of any given race.

As time went on, my father moved to Florida, and after graduating from the UW, I took a job in Madison, Wisconsin. Therefore, I didn’t get back to Michigan or the racetrack for many years. (Every so often, I did make a trip to Dubuque, Iowa, to the greyhound track. However, the experience is not quite the same as a day at the horse track.)

In 2006, I moved to Baton Rouge, Louisiana, and found a job helping out with the recovery efforts after hurricanes Katrina and Rita.

One of the perquisites of living in Baton Rouge was that I once again had access to the pastime that many people from all walks of life have enjoyed—the racetrack.

The racetracks in southern Louisiana have a very unique history and, for a time, were a huge part of the Cajun culture. In fact, up until the late 20th Century, "bush tracks" flourished in many of the small towns located in the Louisiana bayou.

These unsanctioned tracks served as the proving grounds for some the best jockeys in the country.

Jockeys such as Kent Desormeaux, Eddie Delahoussaye, Robby Albarado, and Calvin Borel got their start riding on the Louisiana bush tracks.

While the bush tracks are now just a memory, their history is preserved in book, titled “Cajun Racing: From the Bush Tracks to the Triple Crown,” that was written by Ed McNamara, a sports copy editor at Newsday.

In the book, McNamara documents many of the stories of the tracks, the traditions and the people who lived through this historic part of horse racing history.

While there were many colorful stories that are told in the book, it was the account of Sylvester Carmouche’s ride on a foggy day in 1990 that really caught my imagination.

Sylvester Carmouche’s infamous ride took place on one of the racetracks that is regulated by the Louisiana Racing Commission.

As McNamara describes it in his book, “In January 1990, Carmouch “competed” in a $2,500 claimer at fog enshrouded Delta Downs in Vinton, in the extreme southwest corner of Louisiana. The odds on his mount, Landing Officer, were 23-1, so few could see him winning, and once the race started, nobody saw him at all.”

“Trainers love riders who save ground, and Carmouche couldn’t have done that any better,” writes McNamara. “Mile races at the six-furlong “bull ring” required a quarter-mile run from a chute to the finish line before a full circuit of the course. In the impenetrable fog, the race was only a rumor, and Carmouche exploited the situation by parking his invisible horse at the top of the stretch and waiting for the rest of the field to come around again. His strategy was brilliant but his execution was flawed.”

“When Carmouche heard hoofbeats approaching, he took off with Landing Officer, who won by an insane 24 lengths,” continues McNamara. “With a bit more patience, Carmouche might have pulled it off, but the premature move did him in. The runaway aroused suspicions, and so did a patrol camera that caught only eight horses passing the wire the first time and nine at the end of the race. It didn’t help Carmouche’s case that Landing Officer wasn’t breathing hard or that other jockeys said they never saw him.”

In the end, Carmouche was disqualified from the race, and was ultimately suspended for 10 years by the Louisiana Racing Commission.

Although he was reinstated after 8 ½ years and had some legitimate victories on Hallowed Dreams, winner of her first 16 races in 1999 and 2000, Carmouche will always be remembered as the jockey who tried to cheat his way to victory on that foggy day in January of 1990.

Horse racing is a pastime that attracts fans from all socioeconomic backgrounds all around the world.

While many people associate American horse racing with the state of Kentucky, Maryland or New York, many of the greatest names in the sport have come from the state of Louisiana.

As retired Hall of Fame jockey, Pat Day, is quoted as saying, “I don’t know of any other sport, in any country in the world, where you see this level of success from such a relatively small area.”

Louisiana is definitely a great place to be if you are a fan of horse racing.

However, with all the success and greatness that the state has contributed to horse racing, it also has had its share of black eyes, maybe none more notable than the tale of the “Fog Jockey.”

It just goes to show that even in a sport that attracts some of the shadiest of characters, rules are rules. As the title of this post mentions, even on an oval racetrack, you can’t win by standing still. In the end, you have to actually put in the work to take home the prize.