The Headlamp That Passed the SAR Test

Like backpackers, most Search & Rescue folks are bonafide gear-heads. We love collecting and comparing our outdoor equipment and clothing, checking out what each other has in our packs, and putting new gear to the test. Which is what we did one night at our monthly team meeting, when we decided to test headlamps.

And which headlamp was the best?

Well, our test wasn't all that scientific, and we didn't have every model of every brand of course, but ten of our team members brought in their favorite headlamps, including various models of popular brands like Petzl and Princeton Tec. One person had a brand some of us weren't as familiar with: a Fenix. Retail prices for all these headlamps ranged from $30-something to nearly $100, with most being in the $60-$70 range.

Basically, what we did was turn off the lights in the room and test the headlamps two at a time against the far wall -- a distance of about 40 feet. We wanted to see which lamp was the brightest and which had the most adjustable beam. The winner of each match-up was compared with the next in line.

In addition to brightness and beam adjustment, we also compared battery life, comfort, water resistance, and other features.

Hands down, the Fenix won that night. It was the HP10 model, which is the one I purchased soon after.

That was about three years ago, and I've really put this piece of gear to some hard core use since then, on many Search & Rescue missions in all sorts of weather, while camping, and when hiking after dark, which is something my husband I do at least a few times per week when we take the dogs for a long walk in the forest after he gets home from work.

I've been very satisfied with the performance of this headlamp, which still works perfectly even after being dropped and banged up more than I like to admit (those darn tree branches). It's very bright, with 4 output settings and 3 flash settings. It's also got very good battery life -- usually somewhere around 25 hours on one of the mid-range settings before I notice any dimming -- and fits nicely over my rescue helmet, with an over-the-top strap to prevent it from slipping down.

Left on the headlamp's brightest setting, the batteries won't last nearly as long of course. I've never actually kept track, but I can say that I've used a combination of output settings and gone through weeks of night searches and hiking on one set of batteries.

I've owned several different headlamps, and this one is definitely the best performer. It's great for searches, allowing me to scan an area out to several hundred feet in detail. I've been able to pick up small objects and even tracks at considerable distance.

The model you see pictured above is actually the HP11, which has replaced

the model I have (below). You've still got 7 different lighting options with this one, which also comes with a diffuser, allowing you to switch from a focused beam to flood lighting by flipping the lens up or down. And while my HP10 has a very far-reaching beam -- definitely a few hundred feet, I would say -- the HP11 has a reach of around 500 feet on its brightest setting.

Looking over the reviews for the newer HP11, while the majority are 5-star, it seems that the main complaint from those who weren't satisfied with the product was failure of the tilt mechanism -- the small plastic piece that allows you to adjust the direction of the light up or down in about a 60-degree range. This has never been an issue for me with the HP10, which currently (though no longer available) has 99 all 5- and 4-star reviews on Amazon. So perhaps this was a new issue with the HP11. If so, hopefully the company is paying attention and will fix the problem, or maybe already has. After all, they're all about lighting.

Using the Fenix for Search & Rescue

In Search & Rescue, a headlamp is one of many vital pieces of equipment that we all carry in our "24-hour packs" (meaning, enough gear and the right combination of gear to be self-sufficient for at least 24 hours in the field).

Many ... actually, the majority of our missions, both searches and rescues, either begin after dark or continue into the night, so having a reliable headlamp, along with extra batteries, is crucial. In fact, I've been on a number of searches where the subject of the search was stranded or had gotten injured due to the simple fact they didn't have a light source with them or had one that failed for some reason. And that's the last thing we want to have happen to a member of our SAR team, so knowing we have reliable gear is important.

While I always carry a second, back-up headlamp AND a handheld flashlight (the latter often being handy for tracking at night), I've been able to rely exclusively on my Fenix for the past few years.

This is a good 6-minute overview of this headlamp's parts and features, along with an outdoor, nighttime demonstration of the various output levels, both with and without the diffuser. As you'll see, the diffuser screws on over the lamp and can be easily flipped up or down to switch between focused and flood lighting without removing the headlamp.

The output settings range from 4 to 277 lumens. At its lowest setting, the battery life is said to be a whopping 206 hours! Then it drops dramatically from there to 25 hours to the next setting and so forth. At its brightest, though, you can see good details hundreds of feet away.

The HP11 and Other Models

Currently, there are eight different Fenix headlamp models to choose from, three from the simpler, lightweight HL series and five from the more adjustable, rugged HP series.

Here's the HP11 and two others that I've seen used by members of our Search & Rescue team. 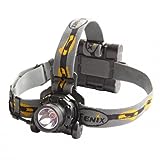 Waterproof LED Headlamp in Black
Replacing the HP10 that I've got and used reliably for a few years and counting, this is one of the most popular Fenix models among SAR personnel, hunters, hikers, and other outdoor enthusiasts.
Buy Now

This is a waterproof headlamp with a max output of 340 lumens. So definitely try not to point this one directly in someone's eyes, or they'll probably say something not so nice.
Like all Fenix products, this headlamp comes with their lifetime guarantee for U.S. residents, which is another selling point for me.

This model isn't quite as powerful as those above, but it also costs less. You've still got 6 lighting options, the tilt feature, and excellent battery life on two AAs.