How My Man Taught Me To Love Baseball

I admit it, I was never a big sports enthusiast. Oh sure, I would watch the Superbowl and the World Series, but only as one of those event things everyone shares. When I met my husband, who was from New England, the first thing I noticed was that he was wearing a Tampa Rays hat. Seemed funny to me with a New England accent that he would be wearing one and not a Red Sox hat. But when people move, sometimes they change their allegiance. He had been a Tampa Bay fan since the day they opened Little did I know that that first meeting would escalate me from a non fan into a full blown baseball fanatic ! Now we are both into Tampa Bay Rays Memorabilia and all the games we can watch

Love Of His Game-His Love Of Me

When I met the man who was destined to be my husband, I was as far from being a baseball fan as I could be. We met for coffee on our first date and I innocently asked him what he enjoyed. Of course the first thing that came up for him was baseball.

He told me of his love of baseball that started out when he started in little league in Massachusetts. He played in varsity ball throughout high school. He was scouted by the Yankees and was even offered a contract in the minors. But at that time, he was going to play the minors (they were not paying much and he had family obligations). So that never quit worked out for him. But his love of the game was his passion. He had gone to many Red Sox games while he lived near Boston. But he found a new passion in the Devil Rays which was the first name of the St Pete Rays as we now know them. He had been to their very first game and had the first game ball displayed at home. Now living in Florida, the Rays became his team. His enthusiasm for the team, either winning or losing was high

Little Touches To The Man Cave 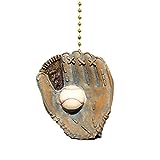 World Series Baseball Glove Ball Ceiling Fan & light Pull
Adding a fan pull was the easiest way to change the room. This was my first dÃ©cor change. And the easiest ! I found this little chain pull and it added a lot to the room.
Buy Now

I have been in the process of creating the perfect man cave for my baseball loving guy ! It's actually an extra bedroom that is his office. I am gradually making it a place he will have a chance to enjoy his special pastime and show hos enthusiasm. Little by little, I am adding dÃ©cor to his room. Here are some of my favorite ideas !

First thing that I did was to get a bedspread in his team colors. In this case, it was blue for the Tampa bay Rays. Easy Peasy !

Then I looked at the room and added a few pictures of baseball. easy to do too. Just add some prints which are easy to find anywhere.

Found a baseball holder that displays some old balls that he has collected.

Added a fan pull, also easy to do ! Add a team logo if he has a special team he likes.

I also found for sale on Ebay some of the give aways that they do. They really added a nice touch.

I also added a garbage pail that had his team on it. Under $20 dollars and he was very happy with it.

I have some plans to add onto his room in the future. He really enjoys his space !

So, I started watching games with him

Then I turned into a full time fan !

It started innocently enough. I simply started watching a game here and there with him. I knew the basics, but didn't always understand it all, so I started asking questions. When I started understanding what was going on, it made so much more sense to me and I started enjoying the game a lot more.

By the time were getting married, I was watching games more often. My soon to be husband had his grooms cake the day before our wedding and it was a Tampa Bay Rays cake, which of course everyone got a kick out of.

Within a few months I knew the players on the teams, what position they played. He was really surprised when I started calling pitches as they went across the plate. I started saying, " strike, ball , too low and too high" More and more I became right on my calls...Though I am not ready to become an umpire yet.

Now I watch as many games as possible with him ! Win or lose, we are still Rays Fans ! Honest fans to the end !

He took me to my very first baseball game. And I have to say that I have never had such an experience. It's all about the excitement and the enthusiasm. It's about the food and the scents around the field.

We had great seats by the third baseline. One thing they forgot to tell me is that sometimes balls come frying into the stands !Everyone thought it was funny that I ducked a few times duing the game But to see the Rays take the field. To see the team members so close is an entirely different experience than watching them on TV. We had seats 4 rows above the dugout and I got to have the full experience. I don't think I will ever forget that game ! I think that made me a real fan !

You really feel the enthusiasm of the crowd. The smells of the food and the vendors is part of the experience. The cheers of the crowd, the music and of course the game itself makes it all so very wonderful !

My Day At Tropicana Field

"Less than a foot made the difference between a hero and a bum."

When I started watching baseball with my husband, I thought it was just about hitting the ball and running around the bases ! I was wrong for sure ! Understanding The little nuances of the game makes it much more enjoyable. Every game that I watch with him, I learn something new. And that effort on my part makes the game a lot more fun.

I am not a stat person, but I know enough to make my vote for the all stars !

"Baseball, to me, is still the national pastime because it's a summer game. I feel that almost all Americans are summer people, that summer is what they think of when they think of their childhood. I think it stirs up an incredible emotion within people."

Your Favorite Baseball Team - Which One Is It?

Well, I am a Rays Fan, but there are lots of other teams in both leagues. So what team do you cheer for?

Who Is Your Favorite Baseball Team?