How to Longboard: Getting Started

Longboarding is a great pastime for all sorts of different people. Some people use longboards to ride down hills at high speeds, perform tricks, and race other longboarders. Others simply like to cruise around at a slower, less competitive pace. However, one thing that almost all will agree upon is that longboarding is an excellent way of simply getting around. University or college students for example, commonly use this as a method of getting to and from class. In this way, longboarding can a very fun and efficient form of transportation.

This is a video of a downhill longboarder carving sharp turns at relatively high speeds.

Traditional skateboards are made for performing tricks. While it is still possible to perform tricks on longboards, the primary goal in the design is for easy, smooth, and fast cruising. One of the main differences between the two types of boards is that longboards are longer, and more flexible. The longer board provides a more stable standing surface while the flexibility helps reduce shock and makes the ride smoother. The wheels on the board are also much bigger and wider. This also makes for a smoother ride because the bigger wheels are less affected by smaller bumps in the pavement or sidewalk. A larger wheel diameter also makes it easier to gain and maintain speed. This makes more efficient use of the energy used to push the board forward, which means the rider isn't required to push as hard or as frequently as compared to what is required of a skateboard. The picture illustrated above demonstrates the size of a traditional skateboard (top) compared to an average sized longboard (Bottom).

How to pick out a longboard

Choosing the one thats best for you

Longboards come in a number of shapes and sizes. the length varies from 90 to 150cm (35.4-59 inches) however most are within 100-130cm (39.0-50.3 inches). Longer boards with a wider wheel base are used for downhill racing and cruising while the shorter ones can be used for tight turns and are generally easier for tricks. The prices of these boards can also range quite significantly. As with most things, buying the cheapest board is not always the best idea. If you are on a limited budget, there are boards for you, and some of them will function adequately enough to get by. However, if you have some extra cash, I would highly recommend spending the extra money to get a quality board.

Where to Buy a Longboard

Very few stores actually sell longboards, and the ones that do I have found to be generally overpriced. This could be the result of the longboard following being relatively small compared to other sports. Your best bet for a decent board at a reasonable price, in my opinion, is to buy one online. I would not generally advise buying a used board since wear and tear on the bearings of the wheels is not something that can be visually appreciated. Furthermore, the bearings could have rusted on the inside after prolonged contact with water. Even a slight amount of rust will lead to a rougher ride and a significant loss in speed. This also makes the board more difficult to push. Therefore, the money you save buying a used board might be lost in replacing the wheel bearings later. I've posted some examples of both low and high quality boards. The first set of boards I would only ever recommend to anyone that is simply going to use the board to travel relatively flat and smooth surfaces. These boards do not handle well at higher speeds, do not turn well, do not provide as smooth of a ride, and are not as durable. The wheels, bearings, and trucks sold with these boards are also of low quality. Essentially they are all around cheaper boards and are only suited for those looking for the occasional casual ride and are low on cash. If you plan on doing any amount of riding, I would strongly suggest spednding the money on a quality board. 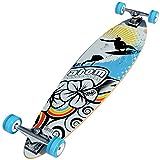 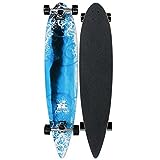 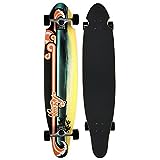 These boards are far superior to the ones shown above. You will notice a difference in almost all aspects including the amount of flexibility and durability of the board itself, the quality of the bushings (which affects the hadeling and ability to turn) and the bearings of the wheels (which will affect how easily the board moves). Anyone serious about doing a fair amount of boarding should seriously consider spending the extra cash for one of the boards below.

If high speeds, sharp turns and power slides are your thing than these are the boards for you. Although the boards featured in the "Quality Boards" section will perform adequately well in this setting, these boards are some of the best in the business and are worth a look if you're considering boarding for a a couple of years and getting into performing tricks and cruising at higher speeds. 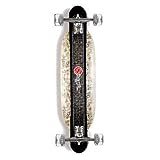 The equipment required for safe longboarding is much the same as what you would expect to find in skateboarding. This includes knee and elbow pads, and a helmet. The importance of wearing protective equipment, especially a helmet cannot be stressed enough. This can make the difference between a minor fall and a major injury. In some states or provinces it is not only suggested to wear a helmet but it is required by law. Fines for such offenses can be quite hefty. Much higher than the price of a helmet in fact.One thing that longboarders will wear that traditional skateboarders do not are slide gloves. These are gloves with special pads on the palms and fingers that allow the rider to place their hands on the pavement while the board is in motion. These are used during a technique called power sliding so that the rider can support himself while keeping his/her hands safe and providing a smooth surface so that the hands can glide across the pavement. Watch the video below for an example of when slide gloves are useful.

A lot of people will attempt to create their own slide gloves in an attempt to save money. However I have found few of these to work as effectively as the real thing. Serious boarders, and anyone planning on traveling at any higher speeds will want to use professionally made slide gloves. The reason for this is that the padding used must provide an almost frictionless surface so that when the hands touch the pavement, the hands do not slow the boarder down too much. If homemade gloves are used, and the friction between them and the pavement is too much, the boarder could be slowed down too much while the board itself continues to travel forward. The danger of this is that the rider can be pulled off of the board when the hands are placed on the pavement, an event that at high speeds could prove to be disastrous. I've provided a link to some excellent gloves that I have seen used, or have used myself. You really can't go wrong in which you choose however the loaded race gloves seem to perform better at higher speeds, albeit with a higher price tag.

The video below shows off some of the tricks containing power slides. After watching some of this video, the usefulness of proper slide gloves should become clear.

As the sport of longboarding has a relatively small following, it can be very hard to find suitable equipment, especially slide gloves, in stores. The best bet for finding good quality gloves is online. Look for brands like loaded and triple 8. Amazon usually has a good selection of these which I've provided a link to. 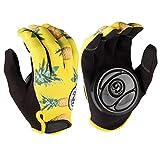 Helmets are not only a really good idea to protect yourself, but are actually required by law in some states and provinces. So make sure you check your local laws before heading out without one.

The triple 8 Brainsaver series is an excellent helmet that provides maximum protection and is also quite inexpensive compared to other helmets of the same caliber. I highly recommend these. They are also available in a number of colors and designs. I've also provided links to some other helmets that I've heard good things about and (just as importantly) look cool. 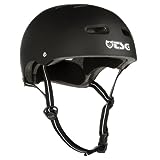 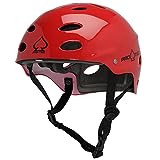 Elbow and knee pads may not be as crucial as a helmet but can certainly prevent injury to both beginner and advanced boarders alike. One thing I would highly recommend is using wrist guards. Most people will extend their arms outward when they fall. This can lead to numerous scrapes on the wrists and palms of the hands and even broken or sprained wrists. Wrist guards provide support to keep the wrists straight during a fall so that they will not be sprained or broken. They also contain a section of hard plastic on the bottom aspect of the palms to eliminate scrapes and burns as a result of falling forward. 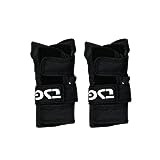 Longboarding is a great pastime for those seeking thrills, high speeds, and performing tricks, as well as those who would like the occasional casual cruise at a slower speed. Longboards are also much better suited for quicker and easier travel which results in a lot of people using them simply to get from one place to another in a quick and efficient way. So ensure you wear a proper helmet and appropriate protection and get out there and get cruising!