Since joining the National Hockey League for the 1967-68 season, the Los Angeles Kings have been a team that has enjoyed regular season success but has had issues in the Stanley Cup playoffs. Still without a Stanley Cup victory to date, the Kings made it to the finals just once.

Over the past two seasons, Terry Murray has been the latest Los Angeles Head Coach to provide the city with a promising team. In 2009-10, the Kings finished with 101 points and the following season they totalled 98. In each post season, however, the Kings were knocked off in the first round. What follows are the coaches of three similar seasons as the past two and the one season where regular season success was hard to come by but the team excelled in the playoffs.

In 1974-75, the roster of the Los Angeles Kings was pretty rag-tag. The team’s saving grace was in net where Rogie Vachon provided the league’s second lowest goals against. The only better goaltender in the league that season was Bernie Parent of the Stanley Cup champion Philadelphia Flyers. Bob Pulford coached the team to a second place finish in the Norris Division, behind only the Montreal Canadiens. The Kings finished with 42 wins, 17 losses and 21 ties for 105 points. The 12th seed Toronto Maple Leafs, a team that finished with just 78 points, beat the Kings 2-1 in the opening round of the Stanley Cup playoffs.

Bob Pulford was in his third of five years as head coach of the Kings. He was the recipient of the Jack Adams Award as NHL coach of the year, the only Los Angeles coach ever to be honoured. After leaving the Kings, Pulford coached the Chicago Blackhawks in seven seasons over a period of three decades. As a player, Pulford played 1,079 NHL games from 1956-57 to 1971-72 with the Toronto Maple Leafs and Kings. He totalled 643 points over his career and was inducted into the Hockey Hall of Fame in 1991.

1980-81 featured the Triple Crown Line at their finest. Marcel Dionne, Charlie Simmer and Dave Taylor all finished with over 100 points and all finished amongst the top ten in the NHL. However, Rogie Vachon was gone and Mario Lessard was providing mediocre goaltending for the club. The Kings finished the regular season second place in the Norris Division, once again behind the Montreal Canadiens, with a record of 43 wins, 24 losses and 19 ties for 99 points.

Los Angeles was once again an early first round exit from the Stanley Cup playoffs. The fourth ranked Kings faced off against the 13th ranked New York Rangers, a team with only 74 points during the regular season. The Rangers won the series three games to one.

Probably the most underachieving playoff season in Los Angeles history occurred in 1990-91. The team was stacked with players like Wayne Gretzky, Luc Robitaille, Tony Granato, Dave Taylor, Larry Robinson, Rob Blake and John Tonelli. Gretzky, Robinson and Tonelli were veterans of several Stanley Cups but Taylor, Robinson and Tonelli were well into the twilight of their NHL careers.

The 1990-91 Kings were coached by Tom Webster. Tom was in his second of three years as head coach of Los Angeles. He was a fourth round pick of the Boston Bruins at the 1966 NHL Amateur Draft. After returning to junior, Webster won the Eddie Powers Trophy as the OHA’s top scorer with the Niagara Falls Flyers in 1967-68 with 114 points. He played a total of 102 games in the NHL with Boston, the Detroit Red Wings and California Golden Seals. He was a veteran of the WHA, playing in 352 games with the New England Whalers.

Then, along came a mullet-headed kid named Barry Melrose in 1992-93 and the playoff fortunes of the Los Angeles Kings took a turn for the good. Finishing third in the Smythe Division with just 39 wins, 35 losses and 10 ties for 88 points, the Kings marched their way to the Stanley Cup finals before falling to the Montreal Canadiens in five games, three of which went into overtime. Along the way, the Kings took out higher ranked teams Calgary, Vancouver and Toronto.

Able to throttle the power of Robitaille, Gretzky, Blake, Granato and Jari Kurri, Melrose enjoyed his only successful season as an NHL head coach. He followed 1992-93 up with one and half seasons of misery before being fired by the Kings. He made another attempt with the Tampa Bay Lightning in 2008-09, but was fired after only a handful of games. As a player, Barry played 300 NHL games with the Winnipeg Jets, Toronto Maple Leafs and Detroit Red Wings. 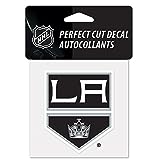 Who is the Los Angeles Kings all-time best player?