A Brief History of the NHL's New York Rangers

The New York Rangers were the second National Hockey League team from the Big Apple to join the NHL. When the Rangers joined the NHL for the 1926-27 season, they were a year behind their roommates, the New York Americans. The Rangers outlasted the Americans, though. The Americans ceased operations temporarily during World War II and never restarted.

The New York Rangers history is dotted with four Stanley Cup victories. Three of the four came in the early stages of the team’s history. It was common for the Rangers to play those Stanley Cup games on the road as the Circus took over Madison Square Garden at that time of year. The fourth came in 1994 after a 54 year drought. In contrast, their cross town rivals, the New York Islanders, have won the same number of Stanley Cups but have been in the NHL since just 1972-73.

The Rangers have had just three 50 goal scorers throughout their history. Vic Hadfield, Adam Graves and Jaromir Jagr are the only three to hit the magic 50 goal plateau. Jagr holds the team record for most goals in a season with just 54.

Three players have played over 1000 games in a New York Rangers jersey. Harry Howell is the all-time leader with 1160 games, followed by Brian Leetch at 1129 and Rod Gilbert at 1065.

2011-12 could be the year the Rangers return to glory. New York has played a good portion of the season sitting in first place in the Eastern Conference. Unlike recent years, the Rangers have built a team of working class players. Typically, in the past, the team would go after high priced free agents and try to buy a winner. This year’s team is a little different. On the front line, the Rangers are led by captain Ryan Callahan, Brad Richards and Marian Gaborik. The blue line is bolstered by a group of youngsters like Michael Del Zotto, Marc Staal and Dan Girardi.

If the Rangers do march through to the Stanley Cup finals in 2012, hopefully the circus won’t be taking up the New York Rangers arena. 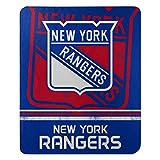