The Fighting Irish from the University of Notre Dame are one of the most legendary College Football teams in the whole of the USA, and 2012 was their most successful season in years seeing them unbeaten until they lost heavily to Alabama in the BCS Championship Bowl.

They ended the 2014 season by winning the Music City Bowl, narrowly defeating LSU in the final seconds to win 31:28.

This world famous Catholic university is located in South Bend Indiana and has seen it's historic football team win 8 national championships (11 claimed by Notre Dame), and had the 3rd most wins in NCAA history as at the end of the 2010 college football season.

From it's beginnings in 1887, when the game was played on a muddy field in South Bend, the Notre Dame football team gained recognition, culminating in the legendary 1924 season under coach Knute Rockne when they won their first National Championship.

This page features some highly recommended books that will take you through the complete history of Notre Dame Football, with stories and the background of legendary coaches like Knute Rockne, Frank Leahy, Ara Parseghian and Lou Holtz, and Notre Dame historic events such as The Four Horsemen and more.

I lived in South Bend from 1994 to 2005, and grew to love going to Notre Dame football games and participating in the whole tradition of game days on campus. Tailgating at Notre Dame on game days is an amazing experience, with hundreds of thousands of fans packing into the campus to enjoy the spectacle that is Notre Dame Football.

Click On The Links Below For Reviews Of Top Notre Dame Football Books From Amazon.com 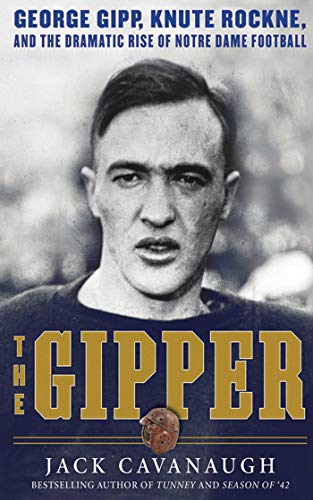 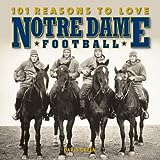 100 Things Notre Dame Fans Should Know & Do Before They Die 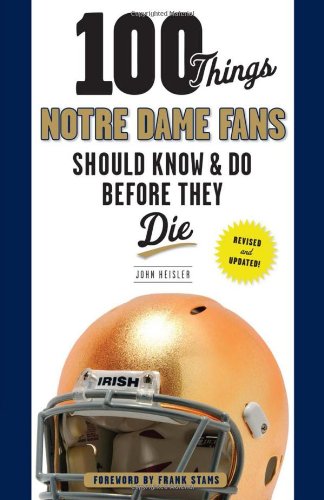 100 Things Notre Dame Fans Should Know & Do Before They Die (100 Things...Fans Should Know)
This great book makes a great gift for Fighting Irish fans both young and old. Notre Dame Football has so much history, and this book has everything any solid Notre Dame fan needs to know about the legends that gave Notre Dame the reputation that they have today. Read about The Gipper, Knute Rockne, the legend of The Four Horsemen, Ara Parseghian, Joe Montana, the history of the Green Jerseys and more.
Buy Now

Loyal Sons: The Story of the Four Horsemen and Notre Dame Football's 1924 Champions

Loyal Sons: The Story of the Four Horsemen and Notre Dame Football's 1924 Champions
90 years after the event, the legendary 1924 season which led to Notre Dame winning the National Championship, is still a big part of Notre Dame football history. This book sets the scene for this magnificent season, and readers will become absorbed in the personalities that contributed to this memorable season.
Buy Now

Then Ara Said to Joe: The Best Notre Dame Football Stories Ever Told 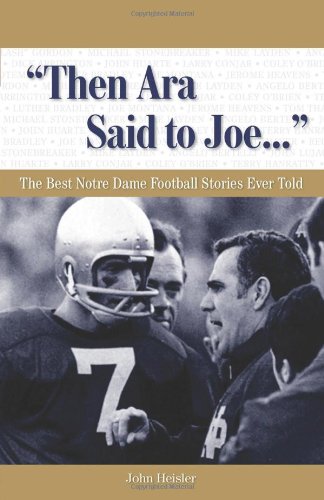 "Then Ara Said to Joe. . .": The Best Notre Dame Football Stories Ever Told (Best Sports Stories Ever Told)
"Then Ara Said to Joe..." explores this entity in a way that has never been done before. This book does not merely scratch the surface, recounting the same old stories that have been repeated time and again. "Then Ara Said to Joe..." delves deep into the little-known stories and the behind-the-scenes conversations of the last 90 years of Fighting Irish football. "We're likely to lose the first game that's been lost on our home grounds in 25 years. That's a fine story you'll be able to tell your grandchildren. You once had the honor of disgracing Notre Dame." This classic quote from Knute Rockne to his team and many more are gathered together to make a classic collection of moments from the history of Notre Dame Football.
Buy Now

Perfect Rivals: Notre Dame, Miami, and the Battle for the Soul of College Football

Perfect Rivals: Notre Dame, Miami, and the Battle for the Soul of College Football
This book begins with the horrendous 58-7 loss that Notre Dame suffered at the hands of the Miami Hurricanes in 1985 at the Orange Bowl. Over the next six years the two teams played each other five times, with three of those games having an impact on the national championship. The bitter rivalry between the two teams was fueled by disputed plays, fighting on the field, and the racial and religious backgrounds of the members of the two universities came to the fore when Notre Dame adopted the controversial slogan "Catholics Versus Convicts". This great book covers this intense rivalry in detail, and it's a great read for Notre Dame fans.
Buy Now

Iron Desire: The Legacy of Notre Dame Football Coach Frank Leahy
Frank Leahy was head coach at Notre Dame from 1941 to 1953. In the 11 years that he held this post, he led Notre Dame to win four National Championships, and had the highest winning percentage of any college football coach in history. Read the story of this legendary Notre Dame coach, from his career as a Notre Dame player under Knute Rockne, through his time as coach, and the legacy that he left behind.
Buy Now

For Notre Dame Fans Only: The New Saturday Bible 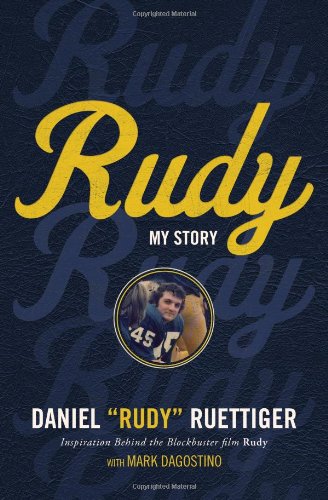 Rudy: My Story
In this autobiography by Daniel "Rudy" Ruettiger, go behind the scenes to experience the heartache, triumph, and glory through Rudy's own eyes,
Buy Now

About The Author Of This Page

Tony is a freelance writer who lives on the South Coast of England with his wife Debbie.

He has worked in the IT Industry all his life, and has been writing on various sites for the last 10 years, and although you might expect that he writes about technical topics, it's anything but that.

He enjoys writing about many different topics, often writing about something that grabs him impulsively at the time. Ancient History and Humor are just two diverse topics that he has a passion for, and he also likes to write about his travel experiences and to share his love of photography.

Tony has traveled extensively, both for business and leisure, and has lived in New Zealand and the USA, becoming an American Citizen before returning to his native England.