The History and Origins of Rugby Union

The Myth of William Webb Ellis and the Origins of Rugby

In 1823, during a game of soccer at Rugby School in England, 16 year old William Webb Ellis picked up the ball and ran with it towards his opponents' goal line. The reaction of his fellow players or any officials is not recorded; but the advantages of playing the game in this natural fashion were obvious to Ellis's schoolmates who followed his example. And so the game of rugby was born.

Or so, at least, goes the popular story. Unfortunately, many argue that the legend is probably apocryphal, pointing out that games that involved running with the ball had existed centuries earlier. This is true. But it is also true, at least, that the earliest form of football with much similarity to rugby as we know it today, did originate at Rugby School around Ellis's time.

An Introduction to Rugby

Probably closer to the truth is the somewhat different version of the tale that appears on the English Rugby Union site.

The type of football played at Rugby School in Ellis's time was not soccer, but a game with a mixture of both soccer and rugby rules.

Handling the ball was prohibited unless the ball was airborne, when a player was permitted to catch it. After catching the ball the player would stand still, as would all the other players. Then the player had the option of punting the ball wherever he chose, or placing it on the ground and kicking for goal.

It is also a fact that in those days at English Public Schools the pupils often made up their own rules as it suited them for the games of football they played. Given the experimentation and different rules used at different times it is unlikely that Ellis, or any other specific player, could be individually and solely responsible for the the development of rugby.

Whatever the case, the story of William Webb Ellis was too good to be abandoned; and he even has an official headstone (see picture above) in the grounds of Rugby School. with this inscription:

THIS STONE
COMMEMORATES THE EXPLOIT OF
WILLIAM WEBB ELLIS
WHO WITH A FINE DISREGARD FOR THE RULES OF FOOTBALL,
AS PLAYED IN HIS TIME,
FIRST TOOK THE BALL IN HIS ARMS AND RAN WITH IT,
THUS ORIGINATING THE DISTINCTIVE FEATURE OF
THE RUGBY GAME
A.D. 1823

Image of the plaque at Rugby School

While the myth of William Webb Ellis, and his supposedly picking up the ball during a soccer match and running with it is not taken seriously by historians, or by anyone else with much knowledge of the subject, by the 1840s running with the ball had become the norm, and by the 1870s rugby clubs had sprung up all over England and in the colonies.

But different rules were being used by different clubs, and a meeting was arranged in January 1871, attended by representatives of 22 clubs, to resolve the situation and agree on a standard set of rules.

It was at this meeting that the Rugby Football Union was founded.

The meeting -- which took place on the 26 of January 1871 -- was initiated by Edwin Ash, Secretary of the Richmond Club.

Ash submitted a letter to the newspapers which read: "Those who play the rugby-type game should meet to form a code of practice as various clubs play to rules which differ from others, which makes the game difficult to play".

Along with the founding of the Rugby Football Union, a committee was chosen to formulate a set of rules that all clubs would abide by. The committee comprised three ex-Rugby School pupils, all lawyers, and the task was completed and approved by June 1871.

And about the same time the Scottish members of the Union challenged the English to a match. This -- the first international match between England and Scotland -- took place at Raeburn Place in Edinburgh on 27 March 1871, resulting in a win to Scotland by one goal and one try to one goal.

Books about Rugby and its History 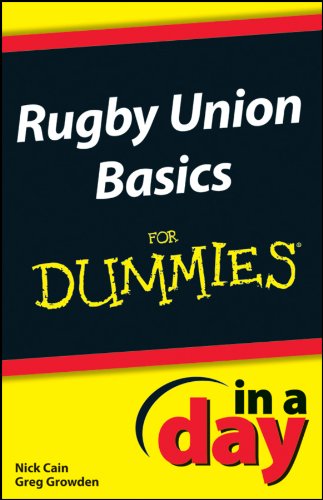 Rugby Union Basics In A Day For Dummies
Buy Now

A commitment of the union was a strict adherence to the principles of amateurism. However, in 1893 reports of some players in the north of England receiving payments for playing reached the committee, and it attempted to obtain evidence. This came through a complaint from the Cumberland County Union that another club had lured one of their players away with monetary incentives. The Union set up an inquiry, but was warned that if the club involved was punished, all the chief clubs in Lancashire and Yorkshire -- from which a large proportion of international players were drawn -- would secede from the Union.

Nevertheless, the inquiry went ahead and the club concerned was suspended. Two general meetings resulted at which the Northern Unions attempted a compromise resolution that would allow payment for players when playing football instead of working ("broken time"). But the resolution was defeated, and, true to their word, in August 1895, twenty-two northern clubs seceded from the Union and formed the Northern Union, later to become known as the Rugby League.

It was a very bitter severance of rugby into two rival camps and acrimony continued for something like a hundred years. At first - and until 1995 in fact -- a major distinguishing feature of the two codes was that rugby league was a professional sport, and rugby union strictly amateur. This though has tended to obscure the fact that, despite their common origins, the two games have evolved into two quite different sports. Since the split in 1895, both codes have made their own distinct rules, and a game of rugby league is almost immediately distinguishable from a game of union.

Apart from this rugby union is no longer an amateur sport. The process by which it became professional is a story in itself. Essentially the IRB The International Rugby Board -- the governing body of rugby union -- has been dominated by worthy English gentlemen who adhered implacably to their cherished amateur principles. But as the demands on top players grew -- increased media attention, the amount of training required, and so on -- increasing pressure was applied, by the Southern Hemisphere unions in particular, to allow player payments.

Along with this was an ever-increasing degree of sham-amateurism. While straight payments may not have been openly accepted, it was obvious that top players in some countries received various benefits and perks from playing the game -- through player trust funds, other roundabout methods, or even through direct under-the-table cash payments.

The IRB finally capitulated to the inevitable, and in August 1995 rugby union became fully professional.

Links to Sites about Rugby History

How Many Rugby Union Teams in the IRB