Your Credit Cards May Be Chirping Your Identity!

RFID chips are becoming more and more a part of our daily lives. What are they you may ask? RFID stands for Radio Frequency Identification Devices. They are tiny, passive radio transmitters which are often placed in products to prevent theft. Now they are also being embedded in identification cards such as passports, as well as credit cards to help speed up transactions.

These passive transmitters basically lie dormant until they are activated by a nearby RFID reader, which sends out a strong radio current that powers them on, then makes them send out a signal which "chirps" information such as credit card account information, expiry date, etc.

You may have even noticed RFID readers which are placed near store exits, or accidentally walked out with a product that didn't get "cleared", thereby setting off an alarm. These double bars that you walk past at the department store are RFID readers and they send out a strong signal that makes the chips "speak".

In the same way gas stations have installed lower powered versions on gas pumps to read quick pay gas cards. Even Visa and MasterCard are now getting into the act with RFID chips in some cards that let you swipe them near a terminal without touching it.

The new US Passports as well as those of several other foreign nations, now contain RFID chips. All of this technology is fine and good, if it is kept in the right hands. Unfortunately, now hackers or identity thieves are making their own portable readers which they can use to steal your private information. These covert RFID readers can be made for under $50 from parts available on sites such as eBay, and can be disguised as a briefcase, umbrella, or other object and taken out into public places. By aiming the covert reader at your wallet or purse, even from across a crowded room, identity thieves can steal your most sensitive information and use it for their own dark purposes..

There have already been several cases of RFID identity theft. All a hacker has to do to build a device is look for plans on the internet and he can be stealing credit card numbers the next day. (For any of you thinking of building your own RFID chip reader, it is a felony and if caught you will face severe penalties.) At a recent high tech convention in Las Vegas, "white hat hackers" used these homemade RFID readers to "sniff" the chips in visitor's credit cards from several feet away, then print credit cards using the information they obtained. The victims were notified and shown how to protect themselves from future acts by real "black hat" hackers.

How Do You Protect Your RFID Credit Cards and Passport?

Some people are protecting themselves by wrapping their credit cards in aluminum foil. This crude method does work by creating a shield around the RFID chip, blocking the incoming activation signal.

A better, much more convenient way to protect your card from being read by hackers is to use a RFID blocking wallet. These wallets contain a metal fiber mesh that makes a "Faraday cage" around the chip that radio waves cannot penetrate.

If you think this is all just "tinfoil hat paranoia stuff", you are sadly mistaken. Chances are that right now, you are probably walking around with a small radio transmitter on your person. If your credit card, passport or drivers license has a RFID chip inside, and it is not shielded, your identity is at high risk and you should consider doing something about it at once.

In addition to protecting your identity with a RFID blocking wallet, you should sign up for an identity theft protection system, in case that your cards are hacked, lost or stolen. It does not take thieves long to use the contents of your wallet to establish credit and ruin your good name. 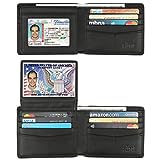