When it comes to popular tattoo symbols for men, there are a wide variety of them available. Finding the perfect tattoo to represent yourself and your personality can be a difficult process for one to take on. It is very important to remember to take your time and make sure you make the correct choice the first time around. This is why doing your own research is very important. You want to make sure that you fully understand what each tattoo represents and means. In this article, we will discuss five of the most popular tattoos available to men. They include skull tattoos, tribal tattoos, Celtic tattoos, dragon tattoos, and koi tattoos. You will be able to learn about these popular tattoos, learn their rich symbolic meanings, and you will have a chance to view a large variety of tattoo designs. Hopefully, you will be able to gain some great ideas and inspiration for your next tattoo.

GETTING YOUR FIRST TATTOO?

The skull tattoo can be tattooed in various sizes, locations, and with other tattoo symbols. Skulls can be portrayed with flames, chains, barbed wire, bats, dragons, or Harley Davidson. Skull tattoos may be designed with only black ink or they can be colorful. There is a lot of variety when it comes to skull tattoos. The skull tattoo fits the personality of someone who is fearless and bad to the bone. 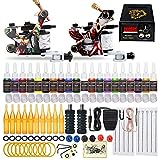 There are several different tattoo symbols that can be done in tribal art. Some of the more popular tattoos chosen are the tribal dragon, tribal sun, tribal cross, and the tribal eagle. Tribal tattooing is more of an tattoo style rather then a tattoo symbol. In early tribal tattooing, men and women would receive tribal tattoos to symbolize certain accomplishments, acts, and social order among the tribe.

Tribal art tattoos are usually chosen by men who have a strong build around the arms, sides, chest, neck, and back. This is not to say that you can't get one if you have a smaller frame. That is not the case at all. Professionally saying, they look much better on well built men. Tribal tattoos can be linked to Pacific, Maori, Hawaiian, and Polynesian tattoos. Tribal tattoos may or may not be symbolic. It all depends on what is being tattooed. In the end, your tattoo symbolizes what you want it too.

Another popular tattoo style that men choose is Celtic art. Celtic tattoos are very popular and they are well known for their creative designs. Celtic tattoos were inspired by the Irish Illuminated Scripts and the Book of Kells. Celtic art includes knotwork, mazes, and spirals. These Celtic designs never intertwine and they have no ending or beginning. These Celtic tattoos represent the circle of life, the never-ending circle we all must face.

There are a variety of tattoo symbols that are from the Celtic traditions. These symbols include the Celtic cross, Celtic Shield, four leaf clover, shamrock, and the Celtic Tree of Life. These designs may or may not be done in Celtic art. If these symbols are not what you are looking for, then you can always go with a Celtic design.

Another popular tattoo symbol among men is the beautiful dragon tattoo. The dragon tattoo is one of the more detailed tattoos available to men. Dragon tattoos are very symbolic and their meanings usually depend on what dragon is being tattooed.

Dragon meanings can completely differ from one culture to another. For example, the Eastern dragon was seen as a noble beast. However, the Western dragon was viewed as an evil and dangerous dragon. Dragons are still a very important character in Asian cultures. Although dragon tattoos are popular around the world, they are highly sought after in many Asian cultures.

Koi tattoos are also a very highly sought after tattoo among men. The koi is a Japanese carp. The koi is highly valued in the Japanese culture. Although the koi is popular in Japan and other Aisan cultures, it is also popular all around the world. Koi fish are believed to have the ability to climb up waterfalls. They are often designed with water and the lotus flower.

Koi fish come in a variety of different colors as a tattoo. The orange koi is by far the most popular koi fish and the same can be said in the tattoo world. The koi fish symbolizes strength, power, masculinity, good luck, and courage. It is said that the koi is the bravest fish in the world. This meaning comes from the fact that the koi does not flinch when it is on the chopping block to be killed.

Koi fish can be tattooed nearly anywhere on the body as they can come in various sizes. Koi tattoo designs are usually very colorful and detailed. It makes for a beautiful tattoo. The symbolic meanings behind the koi fish make it a great tattoo for any male that has showed courage and bravery.