If you visit any of the world’s major museums you can see some of the amazing jewelry that has been excavated from Ancient Egyptian tombs. With the glint of gold and the rich red, blues and greens of the gemstones, beads and paste, Ancient Egyptian jewelry was striking and elegant.

The Ancient Egyptians also brought a lot of their hieroglyphic signs and religious symbols into their jewelry designs and indeed some of the most magnificent necklaces, pectorals and amulets were made especially to be placed on the mummy to help to protect the body for eternity. 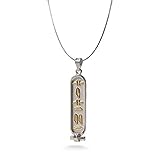 So what is an Ancient Egyptian cartouche? A cartouche is an oval symbol with a straight line on the bottom in which the names of Egyptian pharaohs written in hieroglyphics were placed. Cartouches were reserved for the names of kings and a favoured few other members of the royal family.

The oval shape was a representation of a length of rope that had been folded and tied at one end, which stood for everything that was circled by the sun and protected the pharaoh’s power and name. The oval shape is also a symbol of eternity as it has no beginning and no end.

You can choose personalised cartouche pendants online in either gold or silver and in either a large, chunky design or a smaller, daintier pendant. The cartouche can also contain the hieroglyphs that make up your name in an open style or they can be placed on a solid background. Be aware that there may be a limit to the number of hieroglyphic symbols that you can use, and seven is the most usual limit that I have seen.

If you are not looking for a piece of cartouche jewelry that is personalised, then you can also select jewelry as gifts for your family and loved ones with words like ‘father’, ‘mom’, ‘Grandfather’ and ‘friend’ picked out in hieroglyphics. Or you could choose cartouche jewelry with a word like ‘peace’ or ‘love’ written in it. Of course if you are feeling really regal pick out a cartouche pendant with a famous pharaoh’s name in it! 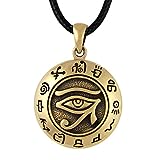 The Eye of Horus is an Ancient Egyptian symbol that is also known as the Wedjat. Horus was the son of Osiris and Isis and was an Egyptian sky god. Wedjat was also an early solar deity who became associated with the goddesses Hathor, Bast and Mut.

The Eye of Horus was used as a symbol of protection by the gods and was often used as an amulet in ancient times to protect the pharaoh both in this life and in the afterlife.

So if you would like to be protected by the all-seeing eye of the gods you can now get yourself an Eye of Horus pendant. An Eye of Horus pendant can be crafted in plain gold or silver or be a bit more colourful and set with turquoise, lapis lazuli, mother of pearl or coral. 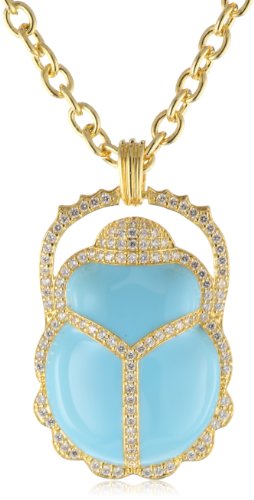 A scarab beetle is a species of dung beetle that is found in Egypt. Dung beetles roll a large ball of dung before them in which they lay their eggs. The Ancient Egyptians associated the scarab with the sun god Ra, as they equated the scarab rolling its dung ball with Ra chasing the globe of the sun across the sky, only for the sun to disappear below the horizon at sunset and be renewed every morning.

So the Egyptians associated scarab beetles with transformation and coming into being. Carved stone scarabs were placed over the hearts of mummies during funeral rites and were worn by Ancient Egyptians for good luck and protection, and would often have the owners name carved in hieroglyphics on it.

Scarabs were also used as a form of communication by pharaohs, and they would have an important announcement carved on a series of scarabs and have them sent out to the far corners of the Egyptian empire.

The protective and transformative powers of the Egyptian scarab beetle can now be yours, as you can choose from a great range of Egyptian scarab jewelry. There is a wide selection available online and Egyptian scarabs are frequently made into pendants. They can be richly encrusted with turquoise, coral and lapis lazuli and also include a carved cartouche.

So whatever your budget, you can find your perfect piece of Ancient Egyptian jewelry in a jewellers or online. Personalised cartouche pendants, Egyptian scarab beetle charms and Eye of Horus amulets all make wonderful and unusual gifts that will eternally delight your family and friends.