Euphoria on Sale at Amazon at Low Prices 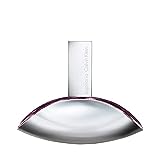 The top notes that make up Calvin Klein Euphoria perfume are pomegranate, persimmon, and lush green accord. As the scent lingers down, the middle notes work their way in – black orchid, lotus blossom and champaca flower. The final or base notes that finalize the perfume are liquid amber, cream accord, black violet and mahogany wood.

In summer months, users can expect the Euphoria perfume to last all day, as it has great silage. In winter months, the scent may need to be touched up after about five to seven hours.

Euphoria is printed in white lettering on the top right hand corner while Calvin Klein is printed on the bottom left corner on the front of the box.

The bottle of the Euphoria perfume is silver-chrome like in coloring.

The bottle also resembles a mirror finish and was designed by the scent creator and Fabien Baron.

The bottle of the Euphoria perfume can be described in appearance as an oval shape with pointed sides.

The cap is long and rectangular – thus, giving the entire bottle design a unique appearance.

Euphoria perfume can be described as:

A very feminine fragrance that has a vanilla, yet powder like aroma.

Hints of flowers are present, as well as sweetness to the scent.

The scent isn’t meant to be classy like Chanel products, Calvin Klein Euphoria is meant to be playful, mysterious and sexy all wrapped up in placed in a sleek bottle.

Enjoy this popular fragrance daily for your signature scent.