As a 60-something female, Kate Swanson is well aware of the challenges facing women throughout their life in health, beauty, and fashion.

Once you've discovered Camper shoes - your feet will be in heaven!

I've always liked Spanish shoes (and not just my flamenco shoes!). There's something about the leather, the quality of the workmanship and the shape of the lasts. I can't remember ever being disappointed with a pair of shoes designed in Spain. They used to be fairly easy to find in British stores, but now I live in Australia, I found it hard to get Spanish footwear - until I came across Campers!

If you're familiar with Camper shoes, you'll know they take it to a whole new level. The leather is still soft and durable, the workmanship is still top-notch - but Camper adds a quirky, original sense of style and fun that I'm finding simply irresistible.

And of all places, I found them on Amazon! 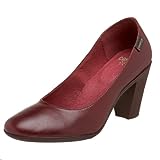 Camper Women's 20830 Helena Alto Pump
Looks like a classic pump, feels like walking on air! These were my go-to work shoes. Rubber heel and sole for a cushioned ride.
Buy Now

Since buying my Campers, I've found that lots of people have discovered them long before me - but many assume they only do sneakers and lace-ups, not shoes you can wear to work.

Not so! My first purchase was a pair of mid-heel work pumps. What I like about them is that they're undeniably a classic pump shape,but the sole and the high heel are made of rubber, so I glide silently (and comfortably!) when I walk, instead of clacking along the office hallways - very handy for sneaking up on the boss!

My Favourite Sandals of All Time!

My favourite pair, though, are my black wedge sandals with crossover straps,which get constant wear in summer. They look smart but they're so comfortable, I don't even kick them off when I get home!

Once again, it's the design detail that really make these sandals. For instance, the back of the wedge is rounded off, so your heel strikes the ground and you can roll forward on your foot naturally, something you can't normally do on a high heel.

The sandals also illustrates one of Camper's hallmarks - it doesn't take the obvious road when putting together a design. The shoes aren't, in fact, identical: the shoe is made of suede and leather, but on the left shoe, it's the right strap and the left crossover that are suede and the other side is leather - on the left shoe, it's vice versa. It's a small touch but to me, it demonstrates a fun yet thoughtful approach to design.

The current model is all leather rather than leather/suede, but they are still a comfy, smart style.

Nothing to do with camping!

I think one of the reasons people aren't aware of Camper's more feminine shoes is the name. If you had never seen a Camper store, you'd assume they sold shoes for trekking, right?

Actually, "Camper" is the Catalan word for "peasant" - nothing to do with camping at all. The name was chosen to reflect the company's location (Barcelona, the heart of Catalan country) and the down-to-earth nature of their product. The original shoes were more about utility, and it's only in recent years their range has expanded in so many interesting directions.

I have only one complaint about Campers - they don't make half sizes. What is it with that? Half sizes were invented for a reason, surely - not everyone's feet are an exact size.

In practice, if you pick a style with laces, a bar or a high front, it won't matter if your shoes aren't an exact fit. Where it is a problem is if you're buying pumps. If pumps are too big, they'll fall off your feet. If they're too small, they'll pinch your toes.

Actually, if they're Camper shoes they probably won't pinch your toes, because the leather is usually so soft, it will expand to accommodate them. However that can mean they'll wear through at the toes more quickly - which is a shame, because they're the kind of shoes you'll want to wear for a long time.

History of the Camper Brand

Camper was founded in Inca, a small town in Mallorca, one of the Balearic Islands off the coast of Spain in 1975. However the family behind the brand has been making shoes for generations.

The real origin of the company probably goes back to shoemaker Antonio Fluxà, who in 1877 travelled to England to learn about industrial shoemaking, and brought back the first machines to manufacture shoes. His children and grandchildren grew up in the shoe factory and continued in the trade, and it was his grandson Lorenzo Fluxà who launched the first Camper store in 1981.

The "dress" Campers may not be for everyone. They appeal to me because I'm one of those people who hates dressing to conform at work. I love the fact that my Campers comply with the "rules" of office dressing while flirting with anarchy - and especially, that they're comfortable at the same time!