Chew on this: Obscure dental facts

Are you a person with a perfect smile and brilliant white teeth? Or, are you like half the population who feels fear when the dentist is mentioned? Whoever you are, you can’t deny that your pearly whites play an important role in your day to day lives.

The facts are that teeth keep us alive. We use them to eat, and we use them to form words for communication. We often take our teeth for granted, but a recent study from the Academy of Cosmetic Dentistry states that 92% of Americans believe that an attractive smile is an important social asset.

Today, we can celebrate our teeth with a plethora of fun, obscure dental facts. Enjoy! And, remember to floss.

According to Guinness World Records, the most valuable tooth belonged to Sir Isaac Newton. In 1816 one of his teeth was sold for a whopping $3,633. If sold today it would fetch about $36 to $47 thousand!

The first toothbrush with bristles was manufactured in China in 1498. Bristles from hogs, horses and badgers were used. It was found to be too harsh and eventually fixed. The first commercial toothbrushes made of nylon that we use today were made in 1938. However, they have records of ancient Egyptians using a form of toothpaste. Colgate introduces aromatic toothpaste in a jar in 1873, before that toothpaste was a collection of things, but good was not one of those things. It wasn’t put into tubes we use today until 1896.

Eating cheese is good for your teeth. The calcium and phosphorus found in cheese reduces the PH level in plaque and re-mineralizes the enamel. So, if you can stomach it, try to eat cheese after eating enamel deteriorating foods like lemons and citrusy fruits.

It is common knowledge that every set of teeth is different for every person; much like fingerprints. However, the tongue print is just as unique and can be used to identify a person if needed.

Research has shown that people with gum disease are at higher risk of heart disease, stroke, uncontrolled diabetes, and repertory disease. The studies also show that the bacteria created by the disease can enter the blood stream and cause new infections. It goes on to say that 90% of systemic diseases start as oral manifestations.

Cosmetic dental procedures are the most preformed elective surgery. This may be because polls say that more than 80% of people are not happy with their smile.

Studies show that adults with a post high school degree had an average of three more teeth than those without a high school diploma.

There is a person, Michael Fawcett, whose only job is to squeeze Prince Charles’ toothpaste onto his royal toothbrush. Fawcett, is according to numerous news sources, the only person who Charles trusts with this tremendous responsibility.

Dental work has a history that goes back 9,000 years ago. Teeth found in adults from that time period had holes drilled with sharpened flint points. Specialists believe that the holes were filled with some type of material but are unable to identify it as so much time has passed.

In Argentina a burglar was caught after he lost his false teeth during a break in. The victim, Juan Navarro, was robbed by three men, and during the robbery one of the men lost his dentures. The newspaper “Noticias Populares” reports that Navarro handed the dentures over to police. He then noticed that his own nephew was missing his teeth. Navarro reported his suspicions, tests were done, and the match was maid. A police spokesman reported to the popular newspaper “What a funny thing to happen. Caught by a denture! Unbelievable!”

The same scenario of lost teeth helped solve a crime in North Poland. Wojtek Lekowsky, 54, broke into a car and dropped his teeth. The police scanned records and were able to find him in a short time to charge him with the crime. 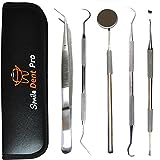