Cinnabar Stone (also mentioned as cinnabarite) is a lovely deep Red stone with a sub metallic luster. Cinnabar is the red crystalline form of Mercury Sulfide (HgS). It is seen in red or brown amorphous masses. Since it is mercury based, caution should be used in the handling of it as it is highly toxic. It is normally seen in bright red, purplish red to brownish red colors. Cinnabar is the principal ore of mercury and is found in rare localities. Cinnabar is formed at low temperature especially near hot springs or where there has been volcanic activity. Because of its unique red color it was also used as a dye earlier. It is also known to be used in royal burial chambers during the peak of Mayan civilization. Other names associated with this stone are Merchant’s Stone and Alchemists Stone. This stone has a hardness rating of 2 and 2.5 on the Mohs scale. This gem is associated with the base and third eye chakra. It is also associated with the zodiac sign of Leo.

Some say that the word 'Cinnabar' is derived from the Persian word for 'Dragon's Blood’. Others say that it came from the Greek word ‘kinnabari’ which is used to refer distinct substances. Some say that the name of the mineral originated from India.

Cinnabar Stones are found in places like Spain, Serbia, China, Austria, Russia, Hungary, New Zealand and the US. 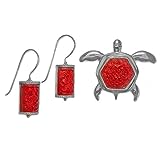 Cinnabar is known to attract abundance in Business. One may keep tumbled stones in the Cash box or wealth corner. This stone is said to give the wearer long life. It also impacts fluency to the mind and speech and releases energy blockages and aligns energy centers. Cinnabar enhances vitality, dignity and helps aggression. As a healing stone it heals and purifies blood and imparts flexibility to the body, stabilizes weight and enhances fertility. It is said that this stone can protect people from evil, negativity etc and bring them good luck. It is also said to assist in relationships by bringing in trust. It is known to be a good stone to use for Meditation.

As the real Cinnabar contained Mercury which is highly toxic, imitation beads are made from a lacquer which is derived from a tree sap found in China. The Cinnabar beads we normally see is actually wood that is stained and covered layers of by lacquer. These beads are normally hand carved (sometimes an image mould is used) when the lacquer layer is still soft with beautiful symbols or images found in nature such as birds and flowers. Sometimes they are also dyed in other colors such as black or green. Pendants and beaded necklaces made with Cinnabar are extremely popular with the fashion conscious individuals. These beads are also an excellent alternative to coral jewelry. Apart from that Chinese lacquer has been used in furniture, night lamp stands and more for a classic and exotic look.

One can clean the jewelry by using lukewarm soapy water and then dry with a soft cloth. Store it in a closed jewelry box when not in use as it may collect dust otherwise.