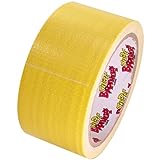 Why Use Colored Duct Tape?

Colored duct tape isn't something that you'll probably need a lot, but when you do need it it's sometimes extremely hard to find. As I'm sure you've already realized, the standard, silver-colored duct tape that can be found at any gas station or hardware shop is really easy to find. However, if you're looking to find any other color variations, then you've most likely had some trouble, which is probably why you're reading this right now.

The main reason that I'm sharing all of this information about colored duct tape is because I just dressed up for a crazy event called Bay To Breakers in San Francisco which required me to put together a unique and creative outfit. Well, I had an outfit pretty much picked out, but once my friends showed up with some colored (neon) duct tape, my outfit went from being pretty awesome to being one of the greatest outfits of the entire event (which is saying a lot!). By adding the colored duct tape into my outfit it took it to a whole new level and from now on anytime that I need a costume, colored duct tape will be part of it.

One of the reasons that duct tape has always been a favorite product of so many people is that it such a flexible and reliable product. Whether you're using it to fix something, hold something together or patch something up, duct tape is always a solid option for doing just about anything.

But, of the other great things about duct tape is that it can be used in so many creative ways. For example, there are entire sites dedicated to duct tape fashion and there's also many people out there who love to carry a duct tape wallet. Well, without colored duct tape, many of these creative uses of the super durable sticky adhesive wouldn't be nearly as popular as they are today. Nothing against the original silver, but in my honest opinion it never hurts to add some color.

One of the uses of colored duct tape that I'd like to focus on is how it can add to costumes and clothing. Like I said earlier, I used some neon colored duct tape to add some serious awesomeness to a crazy outfit that I put together and it really made me realize just how useful a few rolls of this stuff can be.

When thinking about including some colored duct tape into your clothing or outfit, just remember that unless you're making your entire outfit out of duct tape, a little bit can go a long way. In other words, try not to overdo it or you'll just end up looking like a roll of ragged duct tape instead of the awesome image that you initially had in your mind when you starting sticking the colored duct tape anywhere and everywhere.

Here are a few other tips on how you can maximize the impact on your use of colored duct tape when adding it to your outfit or costume: