Facts About Moustaches and Beards

A moustache is facial hairs grown on the upper lip. The word has its origin from the Greek word "mustak", which means upper lip.

On average, facial hairs grow about 0.4 mm every day.

Not only are men seen as more attractive with it but our facial hair can also help protect us against skin cancer.

Facial hair was once prohibited in military.

Babies grow a moustache when in the womb and eat it.

The oldest recorded mustache dates back to 300 BC.

Human mustache can absorb about 20% of its own weight in liquid.

Hair follicles contain different levels of pigmentation, this is why people can have random dark patches or red hairs in their moustache. A vitamin deficiency can lead to dull hairs, stress can lead to gray hairs, while external factors like the sun can also weaken and lighten our facial hair.

Moustaches filter the air breathed in through the nose.

Albert Einstein sported his moustache for over 50 years.

During the Middle Ages, touching someone's beard was considered offensive. This act was grounds for a duel.

The average one-month old mustache is actually capable of holding 10% of a glass of beer, or 30 ml of liquid, before leaking its contents down the man's face.

On average, a man touches his moustache 760 times a day.

If a man starts shaving at the age of 14, then he'll spend an average of 5 months of his life shaving (assuming that he lives until he's 75 years old).

It is illegal for men with moustaches in Eureka, Nevada, USA, to kiss women.

Stroking of the moustache can increase concentration and cognitive ability (and evilness). 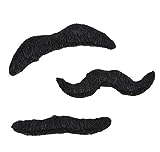 The longest beard ever measured (17.4 feet long) belonged to a Norwegian man in 1927.

Beards have been regarded as emblems of wisdom. Many popular philosophers (Socrates, Marcus Aurelius, Hadrian, Shakespeare) were always bearded.

However, bearded men are perceived to be 51% less cheerful, 38% less generous, and 36% less caring, than clean-shaven men.

98% of the world's richest men in the Forbes 100 List are clean-shaven.

When twisted at the ends, moustaches owners have been said to exhibit fits of evil genius.

It is a myth that if we shave often our moustache will grow faster.

Mustache hair grows faster than your other body hair. In summer and spring, it sprouts more than in winter and autumn.

Pogonophobia is an abnormal fear of beard, it can cause irregular heartbeat, nausea, shortness of breath, and general feelings of dread.

There are many types of moustaches, some of the most common ones include Chevron, Dali, English, Fu Manchu, handlebar, horseshoe, imperial, lampshade, painter's brush, pencil, pyramid, and toothbrush moustache.