Pony Tails: How to Tie a Ponytail Hair Style

The Tail of a Pony

Probably one of the more literally named hairstyles, the pony tail is a simple and informal way to bind your hair for work and play.

Putting your hair up in the ponytail style is easy, and takes only a short period. The mass of your hair is gathered into a single chunk. You choose how high or low to gather it based on comfort and preference. Once you have collected your hair together, you then secure it with some form of hair tie.

Like any hairstyle, the ponytail has numerous variations. My favorite ponytail style was the side of the head ponytail. Was I the only one who still wore that style in the late 90's? I think so, and it was a point of much ridicule for me, up until someone stole my scrunchy and I was too embarrassed to ask my mom for another.

Did you know that ponytails are acceptable in formal occasions as well? With a little modification, you can turn a normal ponytail into a work of art on your noggin; a lot of the tweaking you can do yourself!

Try this sneaky technique for jazzing up a normal ponytail on for size:

Start with a ponytail resting high up on the back of your head. Twist the ponytail tight then fold a section around your fingers, bringing this wrapped chuck of hair to the top of your ponytail. Push the folded section through the center of your ponytail, behind the hair tie. Once the loop you created is through, pull the ponytail down and flatten the dangling hair. Tada! Now you have a flipped ponytail, creating a soft ‘V' shape on the back of your head. This space has a purpose!

Try putting a fresh flower in the flip ponytail, pushing the stem through the hair tie so it remains secure. This brightens your hair style, lets a sweet flowery scent linger in your silky locks, and softens the appearance of a normal ponytail. 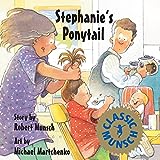 The basic pony tail isn't the only way to tie your hair up. Here are some other styles:

Bun: To create this hair style, gather your hair in the same way you would a ponytail. Wrap it like a pony tail with a hair tie, then twist the "tail" part of the pony tail and in the same direction you're twisting, wrap the base of the ponytail with the twisted hair. Do this over and over until you have two or three inches of hair held in your hand. Tuck this section of your hair into the base of the bun, secure with a second hair tie and voila! Quick and easy bun hair style!

Early 90's bump-tail: Start with a standard pony tail. Put your fingers behind the hair tie, between the hair tie and your head, and split the hair behind the tie in half. Once you've created a little key hole there, take the tail part of the pony tail and flip it up through the key hole. This will roll the hair to either side, giving a little more dimension to your hair.

Blunt braid: A little more complex, this style involves three hair ties. First, pony tail your hair lower on your head, closer to the nape of your neck. Next, braid the tail and secure the braid at the bottom with the second hair tie. Bring the tail of the braid up to the first hair tie and connect the end to the base with the third hair tie. Now your hair will stay up, and contained.