How To Care For Color Treated Or Dry Hair - Hair Repair

How I Know How To Care For Colour Treated Hair

Colouring my hair is as natural to me as taking a bath. It's just something I do on a regular basis. When I was a kid, my mum was either colouring her hair or that of a family member, not because she was a hairdresser, but because she had a natural talent for hair colouring and loved doing it. By the time I came along, my mum was a hair colouring expert and I used to watch her mixing dyes, squeezing people's heads into streaking caps and then torturing them by pulling the hair through with a crochet needle. That was more fun than just watching a regular dye job.

I was hooked! I wanted my hair dyed too. When I was 7 years old curiosity got the better of me and so when she was upstairs, I sneaked into the kitchen, opened the cupboard under the sink and found little bottles of hair lightener. It's wasn't actual hair dye, it was like Sun-In, you applied it then went in to the sun and hey presto! Lighter hair!

So I got a bottle and poured it over my head. I don't recall how got away with having wet hair when my mum next saw me, but she didn't know what I'd done for a while.

The day after I'd applied the lightener, my mum commented on how my hair looked different, but she just put it down to the sun. That was of course partly true. I was now on a mission, I had hated my mousey brown hair for ages, and I knew there was something I could do about it. I had after all watched my mum colour hair for as long as I could remember.

Over the next few weeks I repeated my hair lightening session a few times. my mum again put it down to the summer sun and didn't notice that the little bottles were missing as she didn't use them anymore. That is until one day, when my hair was very visibly blonde, that she went into the cupboard and found out what I'd been doing.

I did get told off as I was only 7 years old and it could have been dangerous, but I had begun something which still to this day I do. I colour my hair and I have no idea what my natural shade is now.

For the record, I did manage to get some streaks later that year, though not by using the torturous streaking cap of those days. Luckily she used foil. I didn't have my hair coloured again until I was 13. From 13 - 15 I was in my experimental colour period. Purple, pink, orangey, you get the idea. From 15 onwards I have pretty much been constantly blonde, with maybe a year of being a brunette via a few months here and there. That's a lot of hair colouring.

You would think that my hair is frazzled. It isn't, but only because I have made a conscious effort not to let that happen. Plus these days I'm keeping to one shade so all that needs dyeing is the roots. It isn't true though that if you constantly dye your hair you will ruin it, you just need to take care of it like you would your skin.

In recent years the hair care market has been flooded with specialist shampoos and conditioners, designed to protect and highlight hair colour, both nautral and colour treated. It's a good idea to invest in products for colour treated hair as shades do fade after time and re-dyeing can damage the hair without proper care and attention.

There's plenty of choice when it comes to buying shampoos and conditioners for colour treated hair, as pretty much every hair care brand has it's own version these days. Lower end brands such as Dove and Sunsilk are the more affordable options, or you could opt for the salon brands such as Redken and Aveda.

Ideally, colour treated hair shouldn't be washed every day as it can dry it out and make the colour fade faster. But for those who need to remove styling products, it's sometimes unavoidable. So long as you make sure that you don't just 'wash and go' and take time to apply products to protect the hair, you should retain the colour and keep the hair from drying out.

What I find works well is if you use an anti-breakage shampoo combined with a colour conditioner. You get the best of both elements of protection then. 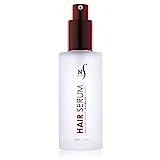 If there is one hair product that everyone who colours their hair should use aside of shampoo, it's hair serum. I don't know exactly how it works, except that it coats the hair strands and protects them, but I don't care! All I know is that serum definitely makes hair glossy, tangle free and stronger.

That may seem obvious, but not all serums explain on the box what formula works best for different hair types. One serum will not suit everyone.

The best way to apply serum is when the hair is towel dried. Squirt the serum into the palm of your hand and rub hands together to warm the serum. Then apply to the end first, middle next and finally the roots. The ends are by far the driest part of the hair as it's the oldest. Applying it this way ensures that the roots don't become greasy. Brush through with a paddle brush.

If you do have colour treated hair and haven't tried serum, then I definitely recommend it. I couldn't be without it.

My other must have brush is a Mason and Pearson. I know that these are expensive, but you definitely get what you pay for with these brushes. They remove dirt and grease and stimulate the scalp with every stroke. They make even fine hair fuller, though are perfect for thick hair too.

I'm certain that these brushes have contributed to keeping my hair healthy.

Other Products For Colour Treated Hair

There are plenty of different products available which could help you look after your coloured hair, but I find that my 3 steps above work perfectly for me.

I don't currently use any of these products because I don't need them, but nonetheless, they are available and if you style your hair with heat, then you definitely should be using some of them.