Love Pearls? How to Choose the Right Pearls

The Pearl - Choose that Beautiful, Timeless Symbol with Care

Pearls, the June birthstone, should be carefully chosen and cared for. Pearls can be a timeless statement of understated elegance or a bombastic display of incredible drama. In today's world, pearls can give a pair of jeans and tee shirt the wow! factor or take the office uniform from mundane to power suit. The right pearls finish the bridal gown or add to First Lady stature and memorable fashion statements. But how do you choose the right pearls for you - for your outfits? And once chosen, how do you take care of them to maintain their beauty?

Included in this article is information on choosing the right pearls and caring for those precious gems once you have them in your possession.

Where Do Pearls Originate?

Pearls have certainly been powerful symbols beginning early in the known history of man. Egyptian Pharoah Cleopatra dissolved them in wine and proceeded to drink them as a demonstration of her immense wealth and power when she was courted by Roman Mark Anthony. Most cultures had strong symbolisms associated with pearls including assigning mystical powers of protection to them such as when the knights of the Middle Ages embarked on their quest for the Holy Grail.

Pearls come in many sizes, shapes and colors. It's that size, shape, nacre thickness, luster of colors and surface clarity, along with the pearls origin, that determines its value. It is that very variety that also inspires jewelers to construct necklaces, bracelets, earrings or any other type of jewelry that springs from the imagination. In fact, there are contests which reward those designers who shine such as the one that is sponsored by the Cultured Pearl Association of America (CPAA).

Pearls are harvested from a natural body of marine or freshwater or they are harvested from man-made, tended fisheries. Natural pearls are found in the Indian Ocean, the Gulf of Mexico, the Australian coast even the Mississippi River and various rivers in Europe including Scotland and France.

When such an irritant - a grain of sand, a particle of food, a parasite - is introduced, the mollusk will begin to form a hardened substace around the offensive object. This substance, called laminae, will grow as layer on layer of calcium carbonite is formed around the irritant to eventually form the pearl.

Cultured, Natural and Other Considerations

Natural pearls were rare (and rarer today because of demand and pollution) and obtained at great peril to the highly skilled diver diving without any breathing apparatus. Before the advent of pearl culturing, pearls were obtained by divers who performed dramatic, risky dives in waters of great depths in the Indian Ocean, South Seas and waters off Australia. It was not unusual for these waters to be filled with dangerous sharks and other perils. Diving for pearls continues today, although more often divers are now collecting the mollusks to be used in the man-made pearl beds.

Man has been culturing pearls for the last seven centuries. However, it was the Japanese, K. Mikimoto being one of them, who perfected the process during the late 1800's, successfully creating a round pearl from the Akoya oyster. The cultured pearl became popular during the 1950s when designers began to use them in their lines and as a part of their own dress.

The natural color of the pearl is determined by the waters the mollusk is found in and range from brilliant white to browns to grays, corals and even black. Cultured pearls can be in a wider range of colors because the colors can be artificially introduced to the pearl. Tahitian pearls are sought after because they are the largest and rarest of pearls and are brilliant white but can also be a beautiful, spherical black. The Gulf of Mexico also sometimes yields the black pearl. Not only is the black pearl beautiful, it is the hardest of the pearls. Pearls from the Indian Ocean tend to be white with either rose or yellow undertones while Bahamian pearls often found in the conch tend to be pale rose to deep coral.

Pearls from freshwater mollusks are usually irregularly shaped and are called baroque pearls. Saltwater pearls are, on the other hand, more spherical in shape and are the most valuable. They have the most value when they are spherical and have silvery or milk white color.

When deciding on pearls, start with your budget. If you can afford them, buy natural pearls. They have a thicker nacre and their luster is going to be higher. There price will go into the thousands.

However, there is nothing wrong with the cultured pearl. In fact, cultured pearls make up 90% of the pearl market. In today's world, pearls aren't just for royalty or the very wealthy as they were in the past and the demand for them continues to be high.

Create Your Own Style 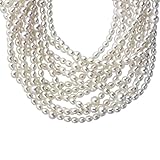 Choosing the Length of Pearl for You

There are varying lengths of pearls. Often the length and style is dictated by the fashions of the day and on your tastes. The choker length is usually 16" or less. The princess length is 18" long and the matinee and opera lengths are 23" and 36" respectively.

Queen Elizabeth I (1533 - 1603) had a "passion for pearls" wearing them in her hair, adorning her crown, woven into her clothes and worn as ropes down to her knees. Princess Grace of Monaco often wore a single choker strand. Jacqueline Kennedy's favorite pearls were three strands that were not pearls at all, but rather faux pearls so famous they sold at auction at Sotheby's for over $200,000.00. Actress Sarah Jessica Parker was photographed swathed in layers of varying lengths.

In short, there is simply no hard and fast rule of when or how to wear pearls today. They can look fabulous with jeans and a t-shirt or elegant with a little black dress. Just as different colors look different on each individual and with each outfit, so does each length of pearls What you want is a look that is stylish and not comedic, so don't be afraid to let the mirror and a friend be your guide.

No Special Care for Your Pearls

Pearls are organic gems which will breakdown over time. They should be worn often, but there are a few simple rules to follow to extend the life of the pearls and you will be able to hand them down over generations. First and foremost is to remember they are a soft gem; store them separately, in a soft jewelry pouch or flat in a jewelry box to avoid chipping the nacre.

If your pearls must be cleaned have it professionally done occasionally and restrung yearly if you wear them often.

Pearls are certainly to be enjoyed. Don't store them away or they will lose their beauty. The heat and the oil from your skin is just what pearls need. Enjoy them!

Sources: People and Pearls: The Magic Endures by Ki Hackney and Diana Edkins, The American Museum of Natural History, Gemstones of the World by Walter Schumann, Precious Stones by Dr. Max Bauer

Caring for your precious gems