The cool and groovy skinny wire-framed, round 'granny glasses' that John Lennon first appeared in the 1960s are a classic design and of course, predate Lennon. The circle style goes right back to the earliest glasses and up until WW2 were still the commonest style.

The history of glasses is actually very interesting and probably begins around 2000 years ago, though no-one is entirely sure. The first reading glasses were called reading stones and were a bit like a heavy ping pong ball cut in half, formed from two primitive convex shaped glass/crystal stones. The reading stones were just very basic magnifiers, used by monks and artesans but they must have come in very handy, considering there was no such thing as a prescription lens.

These were an adaption of what was most likely just a simple magnifying stone - somewhere along the line, someone must have noticed that convex shapes made things bigger. According to the early records, the reading stones that appeared around 1200 in Italy were given a frame and handles and were joined together by a rivet, thus forming the basic spectacle concept we use today. The handles however, were not worn over the ears but rather rested on the nose.(see picture below). Note that the shape is very similar to those worn by John Lennon, albeit with a much thicker frame.

As the centuries wore on and the scientific revolution entered the picture, more sophisticated versions of glasses were made, including lenses that were progressively graded according to need. Concave lenses, for short-sightedness were developed a few centuries after convex glasses.

John's glasses were relatively thick - they weren't just for show. Lennon wore prescription bifocals, for although he was quite severely short-sighted he also suffered from astigmatism, a refractive error where vision is blurred due to an ability of the optics of the eye to focus clearly on an object.

The legendary performer was among the first (along with Buddy Holly) to publicly use his glasses as a fashion statement and the shape and style was typical of the sixties penchant for classic, pre-war styling.

In his younger days John Lennon was quite self-conscious about his poor eyesight and reputedly loathed the 'National Health' spectacles he was given as a child.

For a time he switched to groovier Buddy Holly specs but in the early Beatles days, he was rarely seen with glasses at all. Only later, it seemed, did he develop the self-confidence and individuality to make his glasses a philosophical statement rather than the manifestation of a defect.

The orange tinted glasses John Lennon wore while composing the Imagine album are said to be the most valuable spectacles in the world and are on permanent display in the Beatles Story museum at the Albert Dock, Merseyside.

The orange glasses are on permanent loan from a generous anonymous British businessman. Originally, they were the type of photochromatic glass that reacts to light but age has made the tint fixed so they are now permanenly orange. 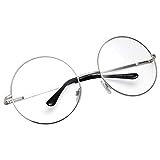