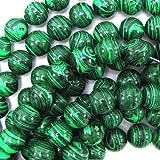 Malachite is a famous and very popular semiprecious stone. It is an opaque and banded green colored gem. It is a carbonate mineral normally known as copper carbonate. It is often resulted from weathering of Copper Ores and is normally found together with Azurite, Goethite and calcite. The Planetary ruler of Malachite are Mercury and Venus. The name of this gemstone seems to have received from either the Greek word 'malakos' meaning soft or the word 'malhe' meaning green herb or grass. This gem stone is associated with the 13th year of Marriage. It is also the Birthstone for those born in the month of July. This stone is most suitable for those born under the Zodiac Signs of Pisces, Capricorn and Scorpio.

This stone is in usage since ancient times and have been quite popular with the Egyptians and the Greek. Carvings and figurines of malachite are quite common. Malachite ores have been also indicators of other metallic ores. In Greek mythology, the throne of Demeter, the Earth Goddess was designed from malachite and adorned with golden pigs and ears of barley. Malachite was used as a mineral pigment in green paints in ancient times and the powder used as eye shadow.

Some of the places Malachite are found include Ural, Siberia, Russia, France, Mexico, Israel, Zambia, South Australia, Namibia and the USA.

Malachite is a mined stone and is associated with the heart and solar plexus chakra and is very useful for concentration and to remove anger and depression. This is the gem for those who want to enhance expression, peace, physical endurance and emotional clarity. This is also a very good stone for the spiritually inclined as it stimulates the physical and psychic visions. This is also an excellent stone for releasing guilt, reducing stress and achieves stability of mind. Malachite is said to aid in the regeneration of body cells, creates calm and peace, and aids one's sleep. Malachite is also said to bring harmony into one's life and hence a favorite stone for those who wish improve or build good relationships.

Malachite Stone also has made its name as a healing gemstone. This stone is also said to be effective in treating heart problems, asthma, rheumatism, circulatory system, arthritis, mental disorders, eye disorders etc. This is also a good stone for ladies having menses problems. This gem is been used in cradles as it is helpful in curing ailments afflicting the babies. A dream of this stone signifies impending misfortune or danger.

Malachite is also popular in jewelry; it is beautiful in earrings, necklaces and pendants. It should be preferably worn as ring on the left hand. Malachite is a very fragile gem and need to be handled with utmost care. This stone should be kept away from heat and high temperatures. This gem can be washed using lukewarm water and then wiped dry with a soft towel.