Ranked as the second hottest and sexiest woman in the world in 2009, Megan Fox catches the eyes of the public with her looks, appearance and acting skills. She also captures the interest of those who love tattoos.

Even though she is a model and actress, Megan Fox has adorned her body with tattoos. She has explained that when she goes and has a new tattoo put on, she is basically rebelling against the world, specifically her mother who does not believe that she should be tattooing herself. Her mother has asked and pleaded with Megan Fox to not tattoo herself as she believes that as her daughter begins to age, the tattoos will limit her possibilities of continuing her career as a model and actress.

Megan Fox has eight tattoos when this article was written.  Her most famous and well known one is the face of Marilyn Monroe that is located on her right forearm.  Megan Fox explained that she Marilyn Monroe was one of the first people she saw when she was a baby and cried every time she heard Marilyn Monroe.  Megan Fox idolizes Marilyn Monroe, and the sixtyish style of the tattoo suits her well.

When she was still with ex-fiancé Brian Austin Green, she did what most men dream about.  She had his name tattooed on her lower right hip, which she refers to as her “pie”, in cursive scroll lettering.  When she was asked what she would do if the relationship ever ended, she responded that she would keep the tattoo since she could always name her son Brian.

On her back below her right shoulder is a tattoo that reads “We will all laugh at gilded butterflies” which is a line adapted from William Shakespeare’s play King Lear.  She explained that her interpretation of this meant that one should not get caught up with Hollywood because people would end up laughing at you.

While we’re looking at her backside, she has the word “strength” tattooed on the center back of her neck in Chinese calligraphy. Interestingly, this was her first tattoo and is the smallest and least conspicuous as it is easily hidden under her hair.  As a result, it receives the least amount of attention. 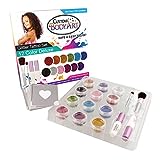 Not all of her tattoos are what Megan Fox ordered.  She is a lover of the ocean and decided to have two waves tattooed on the inside of her left wrist in tribal fashion.  The result was not what she wanted and is considering having it removed.  Many fans prefer that she leave it as it represents her rebellious and spontaneous side.

The most painful tattoo for Megan Fox is the poem that she wrote herself which appears on every rib of her left rib cage.  The tattoo is written in Old English font and reads:

This tattoo fits her slender build perfectly and between the location and text, is one of her most sensual tattoos.

The last tattoo that Megan Fox has as of this date is a colorful crescent moon overlapping a five pointed star.  The meaning behind moons and stars is relative to the individual, and Megan Fox has yet to explain why she chose this tattoo combination.  In addition, this is the only color tattoo that she has and we will have to wait for her explanation on this too.

Megan Fox - What will her next tattoo be?

In 2009, Megan Fox indicated that she was interested in a sleeving an entire arm, but has yet to get it.

For Megan Fox, tattoos are not merely body art but rather they are an expression of her at that time and moment when she is getting the tattoo. Her tattoos are a part of her and an extension of herself. She loves her tattoos so much that she has said that if she should ever lose a role due to her tattoos, she would leave Hollywood.

I doubt that she would lose a role due to her tattoos. Many fans and critics feel that Megan Fox’s tattoos are awesome and her tattoos add to her desirability and sensuality.