Classic Pedal Pusher pants were popularised in the 1950s and were a variation of the Capri style pants worn in the late 1940s. Also known as "Clam Diggers", Pedal Pushers (so called because of the cyclists who wore them) are three quarter pants, worn below the knee on the rounded part of the calf. The pants are sometimes cuffed and embellished with ties at the side, or printed patterned and contrast coloured detaiis.

In the 1950s they were often worn with a shirt tied in a casual knot around the midriff. The pants have a beachy, laid-back feel and were considered pert and jaunty back in middle half of the 20th century, The original Capri pants were named after the beautiful Isle of Capri, playground to the rich and famous.

Even Barbie had a pair of Pedal Pushers in the 1950s - the reproduction doll at right shows her in a short-sleeved retro print blouse over blue pedal-pushers trimmed with the same retro print. 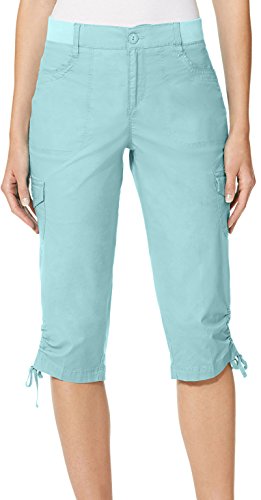 Pedal pushers were favoured by many stars of the 50's and 60's , including Grace Kelly and Mary Tyler moore.

Kelly wore them to great effect in Alfred Hitchcock's 1954 film classic, Rear Window. The pert denim Pedal Pushers with cuffed bottoms formed a contrast to the ultra-feminine clothes she wore in the rest of the film - they were meant to indicate relaxation and leisure. Kelly teamed them with a tangerine shirt, tied at the midriff.

In the 50's the pants were cut high to fit the natural waistline and the leg length emphasised and flattered a woman's calf muscle. Some thought them too provocative and even in the 1960s, actress Mary Tyler Moore caused a stir when she wore a figure hugging paitr in The Dick Van Dyke Show.

Pedal Pushers were so popular that singer Carl Perkins was inspired to write a song about them -She Wore Pink Pedal Pushers (see video below) :

Well, she goes struttin' down the street In her sophisticated style

The way she's dressed was a knocking 'em wild

The cats started gazing till they called her out

Her pink pedal pushers was a-knocking 'em out

Not pants but worth having - Handcrafted miniature pedal pusher car from Wee Forest Folk.