It was 4:40 pm five days ago in a small unventilated room where a meeting of 10 people was being held when the new boss woman entered about 8 feet away from me. Within 30 seconds the scent of a strong perfume entered my left nostril and attacked my inner sinuses like a physical intruder. The realization of a weaponized biological agent was acute as I sneezed and dabbed my free running watery nose.

Up until 10:PM that night the entire left side of my face was totally blotto. Watery left eye, constant drip of the left nostril and then it got worse - my entire head had become infected with the allergen.

Ambergris is regurgitated or excreted flammable wax lumps from the sperm whale, very expensive and rare, it is collected as it washes onto beach shores.

Civet is another nauseating secretion from wild cat glands.

Hyraceum is petrified urine and feces from the Cape Hyrax

Ingredients such as cis-2-Pentenol, (jasmin-like), Allyl Ammyl Glycolate, (pineappe-like), Phenyl Ethyl Iso Butyrate, (honey-like) or other odors are invented in the lab.

Maybe the reason I reacted so strongly to this woman's perfume so adversely is that it was made with Majantol® “An aldehydic citrus tangerine odor with an ocean sea breeze tonality. ” - Glen O. Brechbill, (Bases & Fragrance Ingredients)

All I want to know is: what form of anthrax did this perfume contain to make me still sneeze and have a runny nose 5 days later?

Did you find the above video ...

... where the man told the woman that she used way too much perfume as hilarious as I did?

What are the Madison Avenue advertisers doing with perfume ads? Is there any way that these ads can be any more useless? Who actually goes out and buys a product when the potential consumer is not sure what the ad is actually about?

The major focus is the selling of a fantasy, meme, or mood that has really have nothing to do with the actual scent. The best movie reference about the how some of these perfumes smell more like mosquito repellent rather than an alluring aroma is in the 1987 film “The Lost Boys”

But what is even sadder is that there is actually a perfume called Lost Boys that supposedly smells like warm toasty chocolate coffee.

In 2012, the infamous Brad Pitt's Chanel No. 5 TV ad that totaled over $7 million dollars to produce was ridiculed because it was so hilariously melodramatic that it ended up coming off as creepy. A guy is not going to buy this perfume based on this commercial, the woman is going to buy it herself - imagining that somehow Brad Pitt will escape her daydreams and into her life.

But the $7 million dollar fiasco is dwarfed by the $42 million dollar Nicole Kidman Chanel commercial that runs as a short romance rather than an attempt to sell a product.

What is the most common mistake men make when buying perfume? Probably buying the same brand that their mother wore and telling their beloved such fact. Not very romantic giving your main squeeze the classic 'Old Lady in a Bottle' stench that is so overpowering with a thick sickeningly stifling scent that the 'gifted' would be too embarrassed to re-gift to someone else. 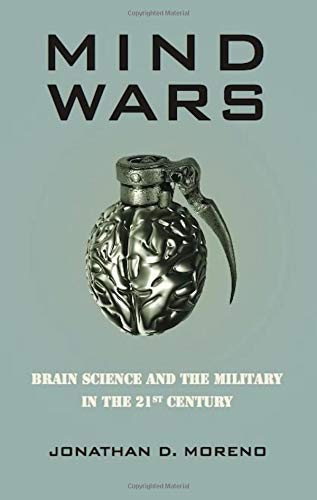 Mind Wars: Brain Science and the Military in the 21st Century
Buy Now

Attack of the Nebulizers!

In Moreno's book, "Mind Wars", chapter 4 under PSYOPS, he wrote, "Psychologists and anthropologists as Wright-Patterson Air Force Base discovered that different races found different odors offensive. Perhaps "smell bombs" could be devised to flush out guerrillas in the dense growth of southeast Asian jungles."

Martynka Wawrzyniak's smell-o-rama in New York City consists of extractions from her hair oils, armpit sweat and tears which are squirted onto visitors as they enter her 'art' gallery.

Smell-O-Vision was 30 odors sprayed into the entire movie theatre in Mike Todd, Jr.'s 1960 film, "Scent of Mystery", but because the diffusion was uneven and untimely, the system was never used again.

I remember going to the 1981 John Water's movie, "Polyester" and each person was given their own Odorama Scratch and Sniff card that was numbered 1 through 10. During the movie a number would flash and the movie viewer was supposed to scratch and sniff the corresponding numbered circle. It became quite obvious after the third or fourth sniff that all of them were all prank smells. At one point the number would flash while a bouquet of roses were on the screen and then at the last second - a pair of old dirty sneakers would be switched out with the roses.