The Mystery of Celtic Jewelry

The mystery of Celtic jewelry begins with its historic design passed on from generation to generation. Steeped in legend and mystery each and every piece incorporates symbolism specific to the Emerald Isle and it’s people. Here are a the top 3 images you will often see replicated in true Celtic jewelry.

The Celtic Cross has long been a theme of this beautiful green island. Dating before St. Patrick the Celtic cross is a variation of the traditional Christian cross and includes a circle at its center. This circle is said to unite the arms of the cross and link it to life-giving properties like that of the sun. In the mid 1800’s the creating and use of the Celtic cross became popular on all things Irish and was included in much of the Celtic jewelry from that point on.

Probably the most famous piece of Celtic symbolism, the knot dates back to at least 450 AD. The Irish not refers to a life without end or a spiritual path or relationship that is an endless and infinite path. It can represent an uninterrupted life cycle and is sometimes worn as a charm. Celtic knots are each unique and can be as unique as the artist who created it. Popular themes include the trinity knot, the mandala sun symbol and the pyramid style knot popular on many tattoos.

A favorite symbol of lovers, the Claddagh is often used on wedding or friendship rings. It contains two hands holding a heart and a crown. The two hands represent friendship while the heart and the crown remind us to be loyal. Claddagh folklore spins the tale of an Irishman who was captured and enslaved the week he was to marry. As he labored away in the home of a goldsmith he was taught the trade of manipulating fine gold. At his escape, Richard returned to his intended and created the now famous Claddagh ring to tell his wife he would be faithful and loyal to the end. 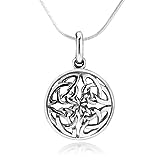