Laura likes retro, vintage, old things. Choosing to preserve or repurpose is her dilemma - can't change your mind once started.

A Bracelet Which Could Have Charms Added to It

I like old fashioned things for young women. I'm also a history buff, a bit traditional with a cultural slant. So, charm bracelets are one of the things I have always liked. I have one.

My Mother bought me the bracelet and gave me the first few charms which I added to the chain. Later, my Dad brought me back a few more charms from his business travels. I have one which came as an oval picture frame and we had a photo of my sisters and myself inside the charm. But, that photo faded to almost nothing and now I can only see an outline of my sisters and I really. But, I know it's there.

That's another aspect to the charm bracelet. Each charm is a preserved memory. Something representing a moment in your life. An event, like a wedding or your first big trip overseas. A person, like the charm your Grandmother gave you one Christmas with the thistles of Scotland, her home country. Or, something just special to yourself, like a flying saucer charm because you really love science fiction and hope all your dreams of aliens from space aren't just wishful thinking.

Charm bracelets may have started as an amulet to ward off bad luck or evil spirits.

In prehistoric times charms were made from clay, shells, and animal-bones. Gems, rocks and wood would have been used later, as tools evolved. As people and charms evolved they were also protection from spirits and in battle. Charms were also used to identify affiliation with religious and other types of groups.

The first charm bracelets (versus charms kept individually or worn in other ways) appeared 600 – 400 BC.with the Babylonians and some time later the Assyrians, Persians, and Hittites.

Queen Victoria brought new popularity to charm bracelets when she designed her own charm bracelet to mourn the death of her husband, Albert.

The Industrial Revolution brought changes all over but it meant items like jewelry became easier and cheaper to produce, thus they became available for the common people, not just those who were able to afford the more exclusive and valuable jewels.

In 1889, at the Paris Exposition, Tiffany & Co launched a chain link bracelet with a single dangling heart pendent. The charm bracelet became fashionable.

Soldiers from World War II brought charms/ trinkets home as souvenirs from local craftspeople in the areas they had visited during the fighting. 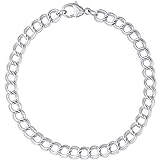