Why Women Make the Mascara Face

When I was little, I frequently sat on the edge of our purple bathtub and watched my mother apply makeup. Every time she got to the mascara, her mouth opened. It was this strange phenomenon, and I finally had to ask.

"Why do you open your mouth when you do that, Mom?" I asked. I leaned forward on the tub to tilt more towards her.

She shrugged and looked at me in the mirror. "I have absolutely no idea." She shook her head.

Now I'm grown and have been wearing makeup for eight or so years. Recently, I have noticed I too open my mouth when I apply mascara. I catch myself doing it and laugh.

Now when I put it on, I keep wondering what causes such a reaction. I decided some researching was in order.

There are so many different answers and not a specifically correct one. Some women don't even open their mouths while applying mascara. I give props to them. I sure can't do it. However, if you do, you are not alone in this task. And if you do open your mouth while applying mascara, you aren't alone there either.

I did a little experimenting myself.

First off, I'd like to say that it is almost impossible to take a picture of yourself applying mascara. And then, even when you actually get a good one, you realizes how absolutely ridiculous you look while putting on mascara and want to delete it.

Anyway, I did, in fact, have difficulties trying to apply with my mouth closed. I found my mouth kept slipping back open. Old habits are hard to break.

Hence, I will just have to remain making ludicrous faces at myself in the mirror.

Don't ever keep your mascara for too long. Replace it frequently. This is because every time you put in the mascara brush and pull it out, it finds more and more bacteria. Researchers say that this can cause serious eye infections and can even lead to blindness. You also should never pump the brush inside the tube, this also is a headway to bacteria.

Most places say to keep it no longer than three months, regardless to how much it's been used.

I can usually tell when mine needs switched because it starts to become dried out. There's still more in there to use, but it's time to buy a new tube. Researchers also suggest to not add saliva or water if it becomes dry. Throw it away. Being cheap won't pay off when you end up in the doctor's office with an inflamed eyeball.

Watch this video of a girl putting on mascara

There is no specific reason as to why some women open their mouths and others don't while applying. I actually noticed that I do it while I apply eyeliner and eyeshadow as well. Happy mascara applying and don't forget to buy new mascara when needed!

Some things about women just may remain a mystery. Perhaps it's better that way. 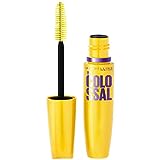